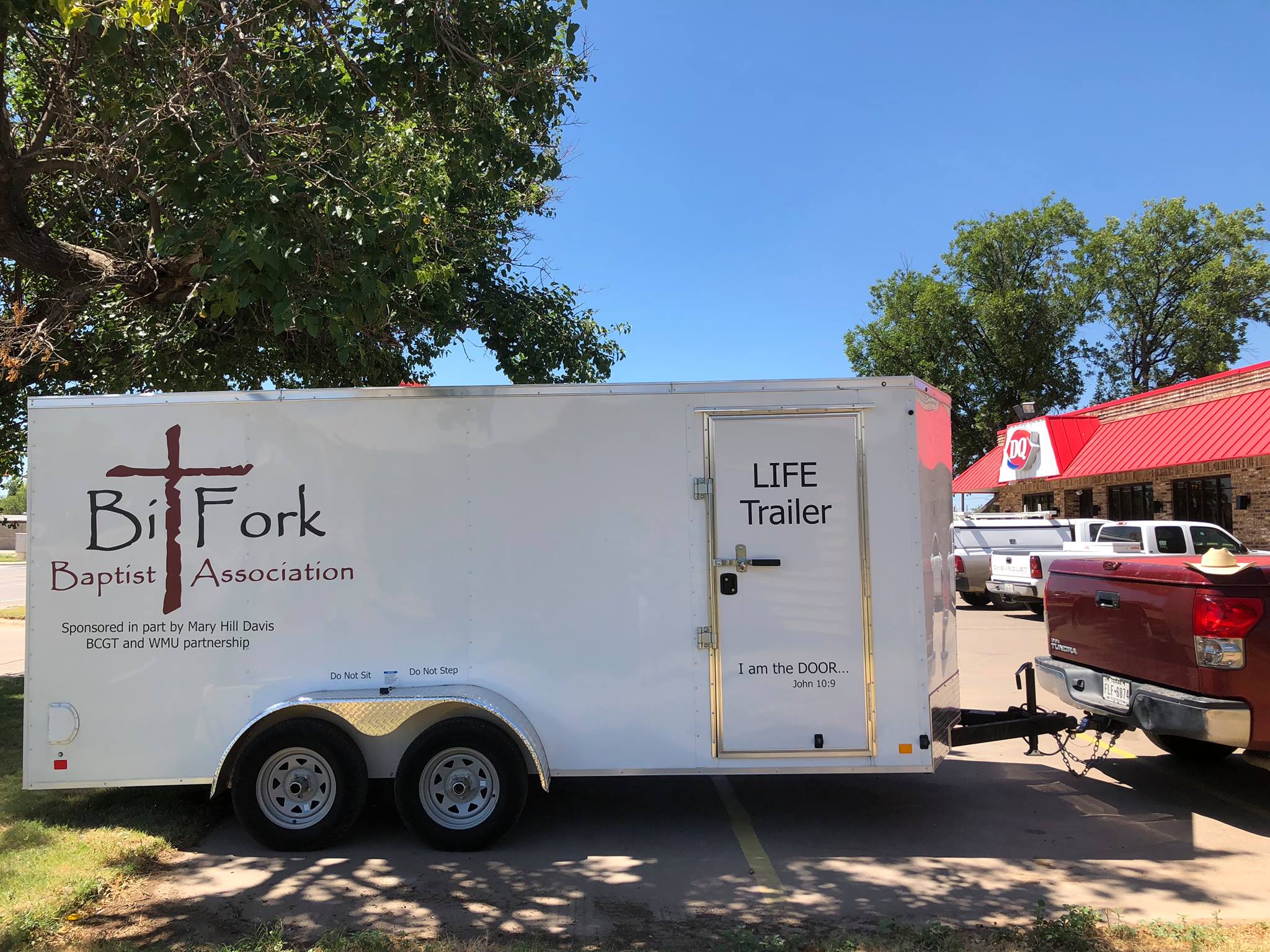 With a span of nine counties and 8,300 square miles, 40 churches are part of the Bi-Fork Baptist Association in the rolling plains of West Texas. Throughout the vast expansion of land, Robert Wheat, the director of missions for the association, wanted the churches to have a mobile resource to reach people in need of the Gospel. After months of dreaming, Wheat envisioned a ‘Life Trailer’ that was mobile and versatile for churches to utilize in reaching their communities.

After applying for a grant from the Mary Hill Davis Offering, Wheat received $9,000 along with another $11,000 from donations by the association. The total amount afforded for a brand new trailer plus items for entertainment: a bounce house, a popcorn machine, a snow cone machine with nine flavors, a portable sound system, a canopy for shade, four 6-foot tables and 24 chairs.

The grant from the Mary Hill Davis Offering fulfilled Wheat’s dream. He purchased a 30-foot long trailer with the Bi-Fork Baptist Association logo painted on it. Pastors within the association were now capable of incorporating what they called the ‘Life Trailer’ for reaching the lost and the broken.

“When Robert began to discuss the concept of the trailer, I approached him about its use in an area of our town that is impoverished and crime ridden,” said Pastor David Smith of First Baptist Church of Quanah. “We want to begin a ministry to the children who live in that neighborhood.  We are still preparing for that ministry, but we’ve been able to use the trailer for the past two years in our Vacation Bible School. We utilized both bounce houses this year. They were an outstanding success both years and our VBS recreation directors were delighted to have them.”

Pastor Smith hopes to use the Life Trailer again in September for an underprivileged neighborhood. By using the Life Trailer, he hopes to host a block party as a way to gather the children and their parents for popcorn, snow cones, bounce houses and a Bible study.

According to Pastor Christopher Whitney, NewLife was able to offer the families living in the complex the love of Christ. Through the Life Trailer, the church built relationships and shared the Gospel with over 30 people who were not saved. During the event, one man accepted Christ as his Savior.

“For the first time, in perhaps its entire history, the Gospel was preached in a complex where the preaching of the Gospel had never been heard,” said Pastor Whitney. “Thank you, Bi-Fork and those who support it financially. Your gifts help even small churches make an indelible impact on this world that will last for an eternity.”