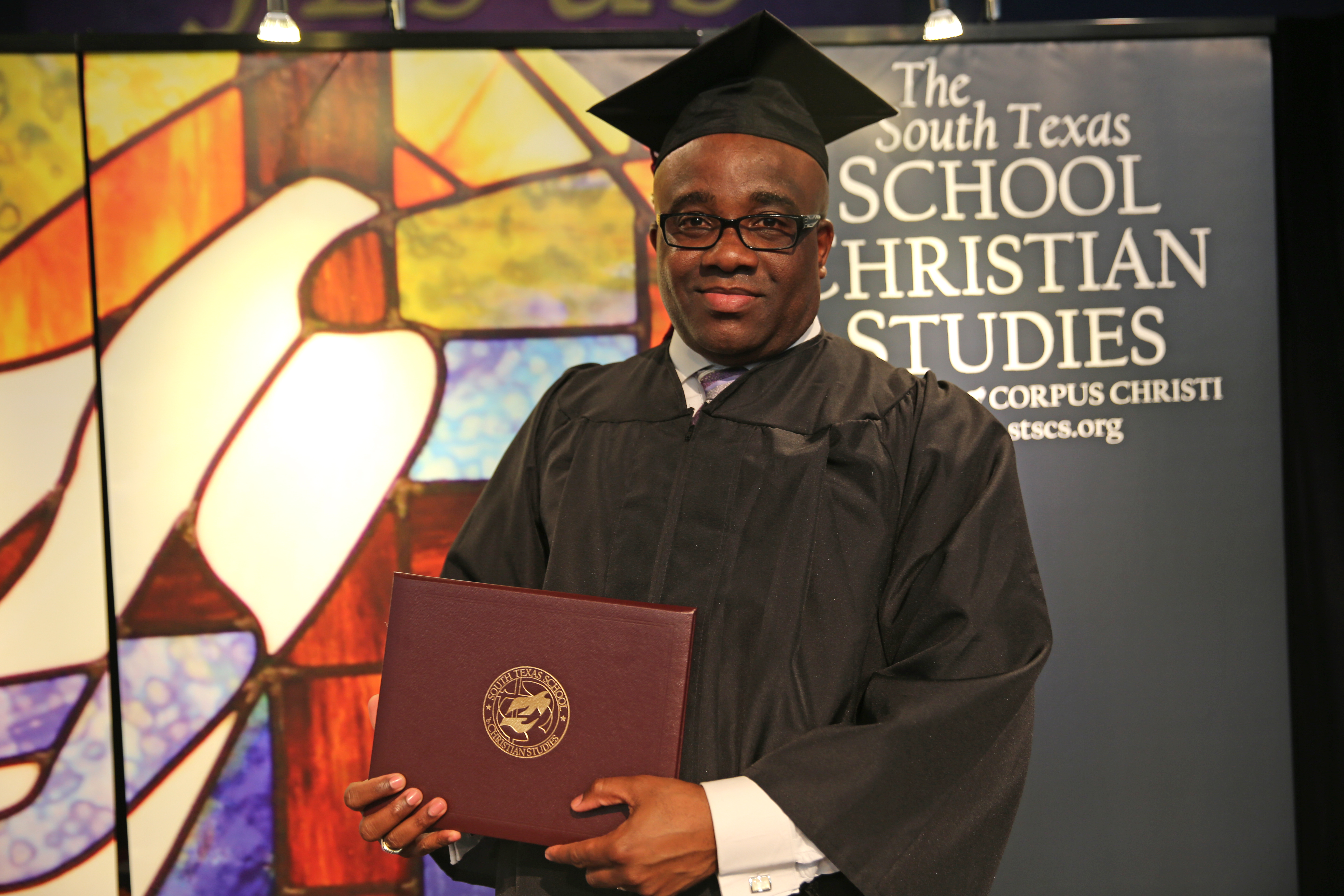 "The South Texas School of Christian Studies has made it possible for me to pursue my theological education in a timely and affordable manner. This institution has polished the brass on my trumpet which I so proudly continue to sound.” - Eric Tarver.

For Eric Tarver, the South Texas School of Christian Studies was not the starting line of ministry: it was the third lap.

Lap one - The Call

He had a rich heritage in ministry. He came from three generations of preachers and his grandfather led churches all around the Bastrop area. Two of his brothers entered the ministry. But God’s call is never genetic or generational; it is always specific and individual.

Eric needed his own calling, and God sent it. It came through a blazing cross, a ballfield prayer, and a godly grandmother. As an 11 year-old middle school student, Rev. Tarver had a strange experience. As he lay in bed one night, a glowing cross appeared on the wall. When Eric asked his sister, who shared the room, if she could see it, she just told him to go to sleep. But Someone else, a voice no visible speaker, had a different comment: “Go preach.”

The next day he described his experience to his cousin, another young preacher. At his friend’s invitation, the two boys knelt right where they were - the practice football field of Bastrop High School, and prayed. That’s when it began to rain. The following morning, his grandmother told him that she had a sense that a child somewhere was struggling with a call to preach. Eric decided the time had come to talk to his pastor. He made his call public on March 15. He preached his first sermon on March 22. The race was on.

Education seemed like a natural move. Morehouse College in Atlanta beckoned, but so did the Macedonia Baptist Church of Carrizo Springs. He accepted the call and began 30 years of pastoral ministry that would take him from Macedonia to Mount Olive Baptist in Del Rio. Then to his current pulpit at the Bethlehem Baptist Church in Beeville, where he recently celebrated 15 years of service. Along the way he became a licensed funeral director, a line of work that allows him the freedom to pastor bi-vocationally and minister in both types of work.

Now came the third lap. In 2012, at the urging of his friend Rev. Arthur L. Lane, pastor of the Saint Matthew Missionary Baptist Church in Corpus Christi, Eric enrolled at the South Texas School of Christian Studies.

As Eric recalls, “I was in Corpus Christi to take the state board exam for funeral director licensing. After I was done, Arthur and I met for breakfast. He told me he needed to go out to the campus to tie up some loose ends because he was about to start teaching that semester. Next thing I know, I am in the admissions office filling out paperwork to take a class for the fall semester, and given a receipt in hand by Arthur that he had paid for the class and purchased my book.”

Over the next four years Eric commuted once and sometimes twice a week from Beeville to Corpus Christi, an hour each way, to complete the 60-hour diploma in Ministry program, graduating in December of 2015.

Many ministers would have seen that as the finish line; for Eric, it was only another starting line. At present, he is taking undergraduate courses through the School of Christian Studies’ partnership program with Hardin-Simmons University. When he accumulates sufficient two credits, he will be eligible to apply for early entry to the Logsdon Seminary program, also hosted on the School of Christian Studies campus. Logsdon permits a limited number of highly qualified students to begin their Master of Divinity studies without completing a bachelor’s degree. Students must be over forty years of age, have at least 90 undergraduate hours and significant ministry experience.

Because Hardin-Simmons and the School of Christian Studies share an articulation agreement, all of Eric’s courses for the Diploma of Ministry will count toward this total, along with his studies to become a mortician. To celebrate his combined anniversaries of 30 years in ministry and 15 years at Bethlehem, Eric’s congregation held a banquet for him.

Among other honors, he was recognized by the Bee County Commissioners Court, County Judge Stephanie Moreno read an official proclamation, Texas State Senator Judith Zaffarini and Texas State Representative J.M. Lozano read statements of recognition from the floor of the Texas legislature, and the City of Beeville declared April 21, 2017 as Eric Rendell Tarver Day.

Eric explains that his congregation has become enthusiastic in supporting his education, despite the time away that it involves. They have seen the increased depth of his preaching and the growth of his pastoral skills. This has served as a living advertisement for the benefits of formal theological training.

SCS President Tony Celelli comments, “Pastor Tarver exemplifies the reason SCS exists: to equip leaders to strive in both their ministry and education. Eric's perseverance in honing his ministry skills is also a great testimony to his church, which encourages his studies.”

Though Eric sometimes jokes that someone keeps moving the mile-markers on the road from Beeville to Corpus Christi farther apart, he is committed to continued advancement as God’s called pastor.