A full house gathered on July 30, for the annual Texas Baptist Missions Foundation (TBMF) Luncheon, held in Arlington, Texas, as a part of the 133rd Annual Meeting of Texas Baptists. This year, the luncheon honored three outstanding servants whose commitment to the Kingdom of God has impacted thousands around the state of Texas and beyond.

Bill Arnold, TBMF president, welcomed the gathered guests, and acknowledged special guests who had gathered for the luncheon. Wayne Stevenson, chair of the TBMF Council, provided the opening prayer. 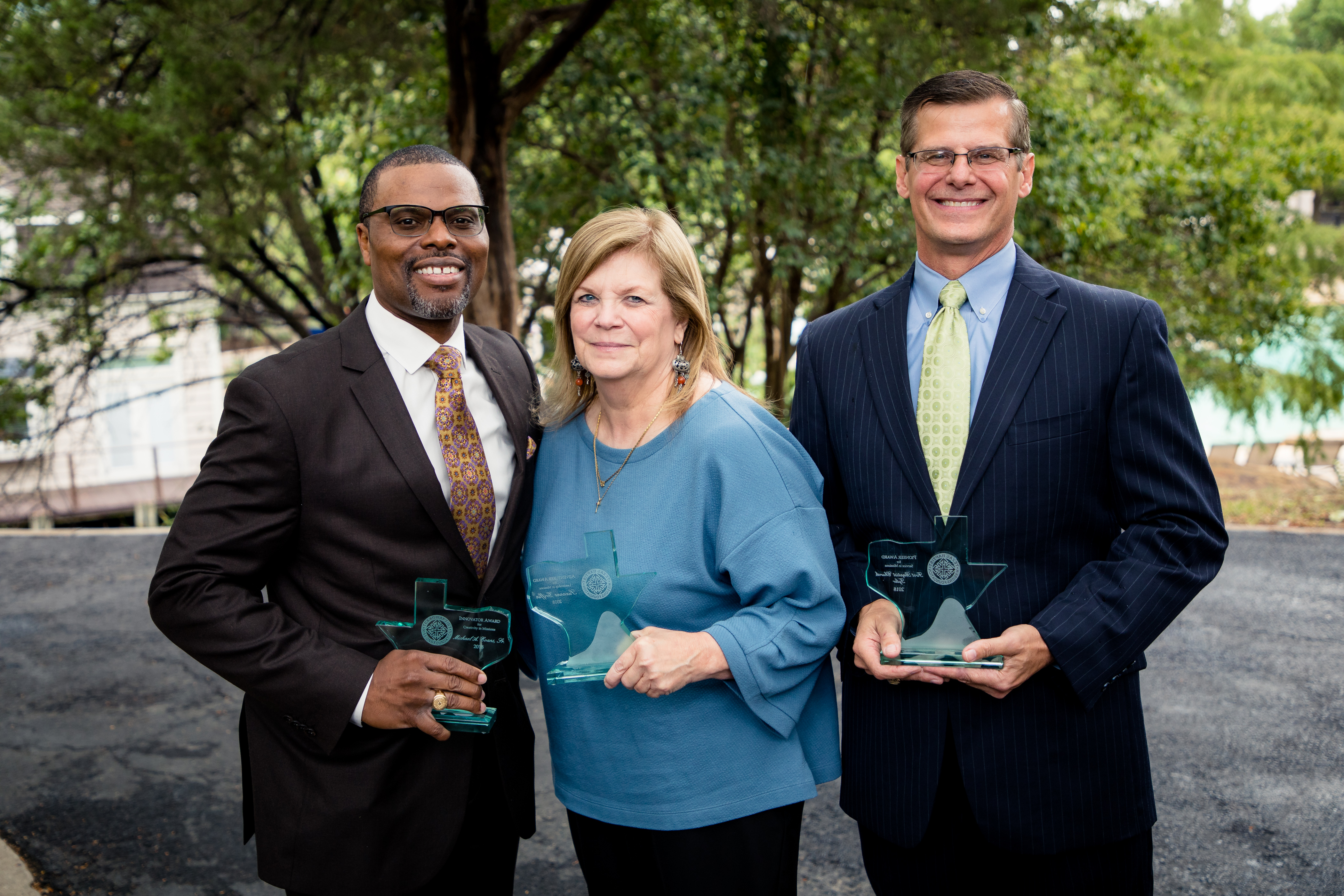 The Adventurer Award for Leadership in Missions, which honors individuals who demonstrate exemplary leadership through missions opportunities, was presented to Suzanne Griffin, executive director of Brother Bill’s Helping Hand, an outreach ministry supporting vulnerable families in West Dallas. While serving at Brother Bill’s, Griffin has grown the ministry beyond a food pantry to provide medical and dental care, counseling services, classrooms and job training.

“Suzanne is a uniquely gifted leader in that she does not just look at a human being and see what their needs are,” explained Janet Denison, a Christian author and long-time friend of Suzanne who presented the award to her. “She looks at the whole person and sees their potential.”

“Honestly, I am not sure how I may or may not have changed lives,” Griffin reflected, “but I can attest to the fact that God used those men and women and my family and my friends to make a significant difference in my life.”

Each year, TBMF also presents the Innovator Award for Creativity in Missions to those individuals who have established new and inventive ways to carry out ministry. This year, the award went to Rev. Dr. Michael A Evans, Sr., senior pastor of Bethlehem Baptist Church in Mansfield, Texas, where he has served for 25 years. During his time as pastor, he has led the church to initiate new outreach programs in their community, in addition to going beyond the walls of the church to work cooperatively with other congregations locally and across the state.

Tamiko Jones, former missions and young adult pastor at Bethlehem Baptist Church and current Executive Director of the Texas Women’s Missionary Union, introduced Dr. Evans, who had that morning been elected as the new President of the BGCT.

According to Jones, “Dr. Evans has allowed individuals to be directly involved in the big things God is doing, things that have changed the face of missions, not only for our community in Mansfield, but also across the world.”

“When you are planted anywhere, I don’t believe that it is accidental,” said Dr. Evans. “Wherever God plants you, he intends you to make a difference. For 148 years, Bethlehem Baptist Church has made a difference in Mansfield, Texas. I am just happy to be a part of the work of those individuals who have come before me and the folks, whom I pray to God, will lead after me.”

The 2018 Pioneer Award for Service in Missions went to First Baptist Church of Tyler, Texas, for their long-standing focus on missions that has characterized their church for 150 years.

Jim Shamburger, senior pastor of First Baptist Church, Victoria, presented the award, which proved to be a personal moment as he grew up in the church while his father pastored in Tyler.

“Thank you to FBC Tyler for giving me the DNA of what church is all about,” said Shamburger. “We are grateful to FBC Tyler and churches like them all over the state who are willing to sacrifice so that the Gospel of Christ can be carried all over the world.”

Accepting the honor on behalf of the church was Paul Roberts, chair of the FBC Tyler Missions Committee. Reflecting on his first encounter with the congregation, Roberts stated, “One of the really unique things that drew us to FBC Tyler was its focus on missions, and over the years, we found this church to be a true Acts 1:8 congregation.”