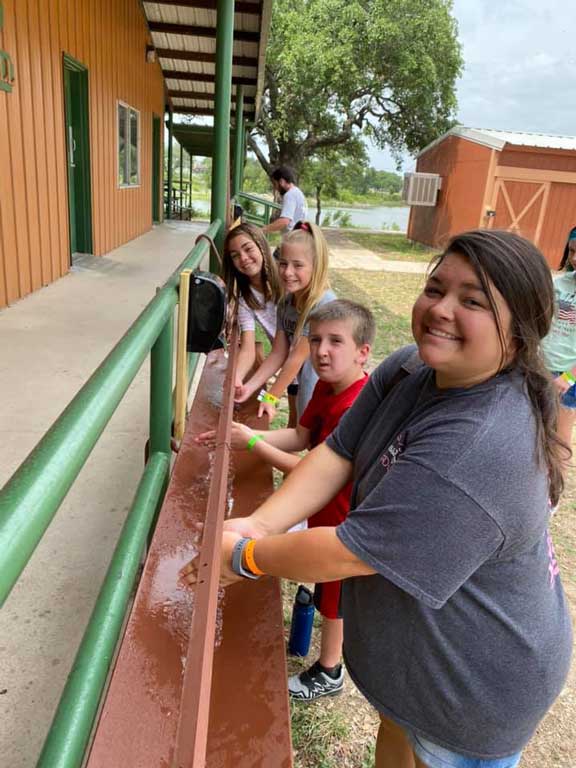 Across the state, Texas Baptists camps have seen big changes in their usual operations as a result of the COVID-19 pandemic. The financial effects of the pandemic have been tough, but camps have modified programs and implemented new safety measures to keep their campers as safe as possible.

To support these camps during this time, the Texas Baptist Missions Foundation (TBMF) has set up the Texas Baptists Camp Relief Fund. This fund aims to provide much needed financial support to camps in the hopes that they will continue to minister to their campers for years to come. The Foundation has received a generous matching gift from the Valley Baptist Missions Education Center to ensure that young lives continue to be transformed through Texas Baptist camps. As of July 23, the Camp Relief Fund has raised $530,826.

"I've been thrilled to see the original matching gift grow as savvy donors give 'no preference' contributions, knowing that their generosity sparks increased gifts to the individual camps. Thanks to this donation matching, donors are able to make an even bigger impact for camps,” Jerry Carlisle, TBMF president, said. “It's as if 2 Corinthians 9:12 is being lived out as Texas Baptists are 'supplying the needs of God's people...overflowing in many expressions of thanks to God.'  This is why the Missions Foundation exists!"

Adjusting to the ‘new normal’

Rhonda Roberts, director of Heart of Texas Baptist Camp & Conference Center, explained that their encampment is at about 10% of their usual calendar capacity for the summer. The encampment is a rental facility, meaning that they do not run the programs, so each camp program is determined by the association or church organizing it, not the encampment.

The Heart of Texas encampment has been able to host two camps this summer, and Roberts has seen a slight increase in churches coming to the encampment to host their own small summer camps instead of participating in large, collaborative events.

New cleaning protocols included increased sanitization of dorms and hand-washing stations. Roberts explained that camps are flexible and willing to work within the parameters set up by governor’s office.

“At camp, we’re all about flexibility. Just give us the rules and we’ll abide by them,” she said. “We’re working under the governor’s standards and protocols for operating a camp. Those standards include adding handwashing stations, hand sanitizer all around the camp, spraying a disinfectant daily in the dorms and bathrooms, and we’re encouraging adult counselors to bring Clorox wipes and wipe down the rooms additionally. We check temperatures every day and have a quarantine cabin if necessary.”

To Roberts, keeping the camp open in any capacity possible is an important way to continue making an impact on the lives of the people who stay there.

“So many people have accepted Christ at camp, or have been called to ministry, or meet their spouse. God uses camps. Big life events happen here,” Roberts said. “It’s really important for people to get away from their normal routine. When people get away they can get a new perspective and give God time to speak. People just hear God differently at camp.”

God is transforming the lives of boys across Texas through Royal Ambassador summer camps.

Several Baptist associations in counties where COVID cases are few have held regional Royal Ambassador summer camps with more to come. Conducted within Gov. Greg Abbott’s guidance, the camps provided an environment where boys could grow closer to God and learn more about how He is working around the globe.

Ministering to smaller groups, camps safely have been able to feature a full range of activities, including archery, water sports and fishing as well as missionaries and worship services. The camps are being helped by TBM State Staffers, high school Challengers who take on leadership roles at the various camps across the state.

“In many ways, COVID-19 created an opportunity for each camp to look at what it’s been doing and make adjustments to make sure they are focused on maturing boys spiritually in a safe manner,” said Alan Huesing, TBM State Royal Ambassador and Challengers director. “This summer, young men are growing in their relationships with the Lord. They’re discovering how they can serve Him. We are blessed that there have been zero cases of COVID. God is still transforming lives in the midst of this pandemic.”

Mark Clemons, who helped lead RA camps at Alto Frio Baptist Encampment and in Hempstead, said meaningful spiritual discussions are taking place during camps. Boys want to know more about the Lord and grow in their faith.

“There were some good conversations,” he said. “They got to do some things they’ve probably never done before.”

Mike Wilson, CEO of Latham Springs, explained that the success of small camps like the Royal Ambassador one is why they are continuing to stay open.

At Latham Springs, there have already been over 100 students who have made a commitment to Christ this summer.

“You never know where these kids would be spiritually if they hadn’t come to camp,” he said. “Even though our numbers have been down, it’s amazing to see what God has done in our camps. God is so much bigger than COVID.”

“We provide an environment where kids can get away and be surrounded by people devoted to establishing and strengthening their relationship with the Lord.”

Following a small outbreak of COVID-19 amongst church members renting the grounds,  Latham Springs shut down their camp for a two-week period to deep clean and ensure the facilities and staff were safe.

Even though numbers may be down this year, Wilson and Roberts are focused on keeping the camps open so that they can be ready to welcome campers next summer. They are hopeful that the Camp Relief Fund will help them do so.

Wilson asked that churches pray for camp leaders as they navigate these difficult times.

“Pray for me for wisdom as I lead through all of this,” he said. “But at the end of the day, we know God is in control. And even though there’s a lot of storms brewing, we know the one that controls the storm. COVID didn’t catch God by surprise.”

To contribute to the Camp Relief Fund, click here.