WBU Students Donate to FISH as Part of the SHINE Project

PLAINVIEW - Wayland Baptist University students continue to lend a helping hand to the community through various service projects as part of the SHINE emphasis on campus this year. Led by Donnie Brown, director of spiritual life, Wayland is focusing on Matthew 5:16 to "let your light shine before others, that they may see your good deeds and glorify your father in heaven."

Students were divided into small chapel groups this semester and each group was challenged with developing a service project that addressed poverty, hunger or human trafficking. On Wednesday, three of the groups loaded 16 boxes of donated canned food items to deliver to the Faith In Sharing House (FISH) in Plainview. FISH is a food pantry that services families in Hale County. 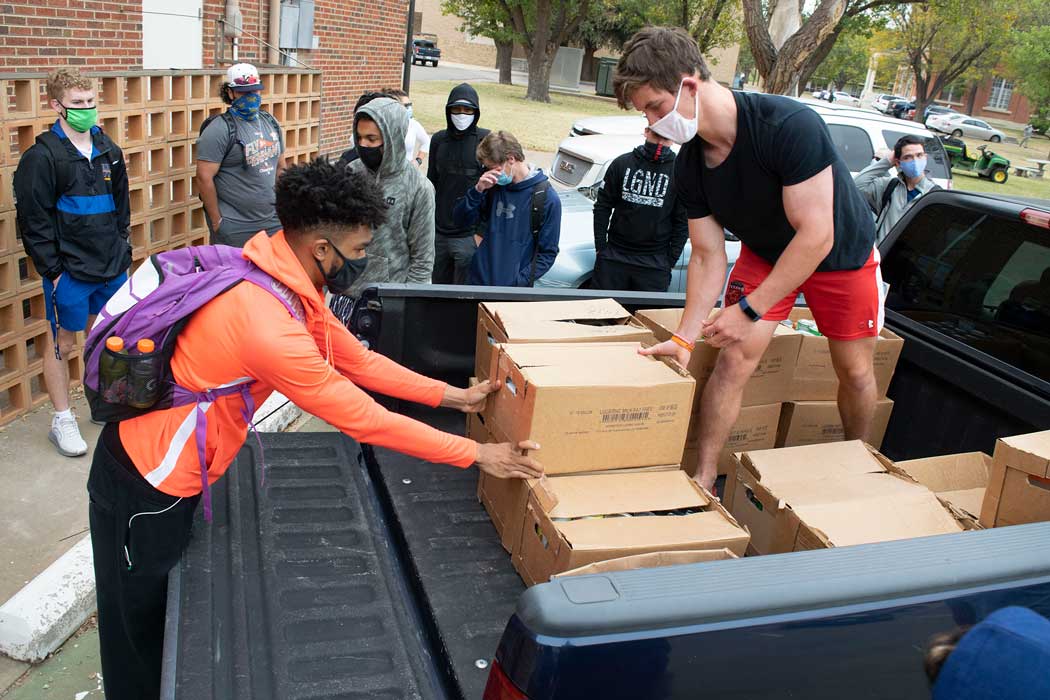 Dr. Kassie Lane, who led one of the groups, said the donations are filling a definite need for FISH.

"We found out that with the pandemic, organizations have not been able to donate as they have in the past, and so this is actually helping them fill their pantries for our community," Lane said.

Most of the donated food came from the students who would bring cans for extra credit on course assignments. Still, the response was overwhelmingly.

"They know what it's going to, so I only asked for five cans and they would bring me 12," she said. "That was really neat the way they got involved."

Another group project raised $156 by selling cupcakes and giving out bracelets to raise awareness about the need to end human trafficking. On Wednesday, the donation was given to the Crisis Center of the Plains that serves as a shelter and offers assistance to domestic abuse victims. Still another group has been collecting essentials such as toiletries and socks to stock a supply closet for individuals who may not be able to afford such items.

Brown said the student-led initiatives are benefitting several groups and organizations in the community. Chapel groups are working with organizations like the Rainbow Room and Salvation Army, and still others are coming up with more initiatives to raise awareness of human trafficking. A few groups joined forces and led an initiative to clean up an impoverished area of town.

Another group issued a 4-day challenge to individuals to do without specific items that most people take for granted. Day one focused on doing without shoes, day two without hygiene products, day three without a bed and day four without food. Individuals were then encouraged to make a donation to an organization that helps provide those essentials to people in need.

Brown said the response of students has been inspiring.

"They don't have to be involved in this. It's not a requirement for them to do this shine project," he said. "But what we're seeing is that they're involved. They want to be involved and they're coming up with some incredible ideas and that's what's so cool about it."