In light of the many stresses and challenges that face law enforcement officers today, South Texas School of Christian Studies (SCS) seeks to encourage and empower local public servants by offering affordable theological training. One way SCS put this mission into action was to offer its First Responders Servant Leadership Summit in November 2016.

The concept for the summit originated from conversations between Dr. Tony Celelli, president of SCS, and Troy Riggs, a board trustee of SCS and the former Corpus Christi Chief of Police. Their main purpose was to determine a way to provide education for public servants that focused on leadership formation and ethics training.

“As the name implies, public servants are individuals dedicated to the betterment of society through their professional duties,” says Dr. Celelli. “As the recent trends in violence reveal, both training and greater spiritual emphasis are needed to equip public servants with a sufficient belief system that leads to appropriate behavior.”

The speakers and panelists shared scriptural truths along with their professional and personal experiences. One attendee commented that, “It was a great opportunity for law enforcement officers to learn about the servant leadership role as modeled by Jesus…. It was particularly inspiring to hear from Chief Markle and Sheriff Kaelin about the priority of God in their daily lives…..[as] they encourage the free exercise of faith among their employees so long as it is not an imposition on others.” 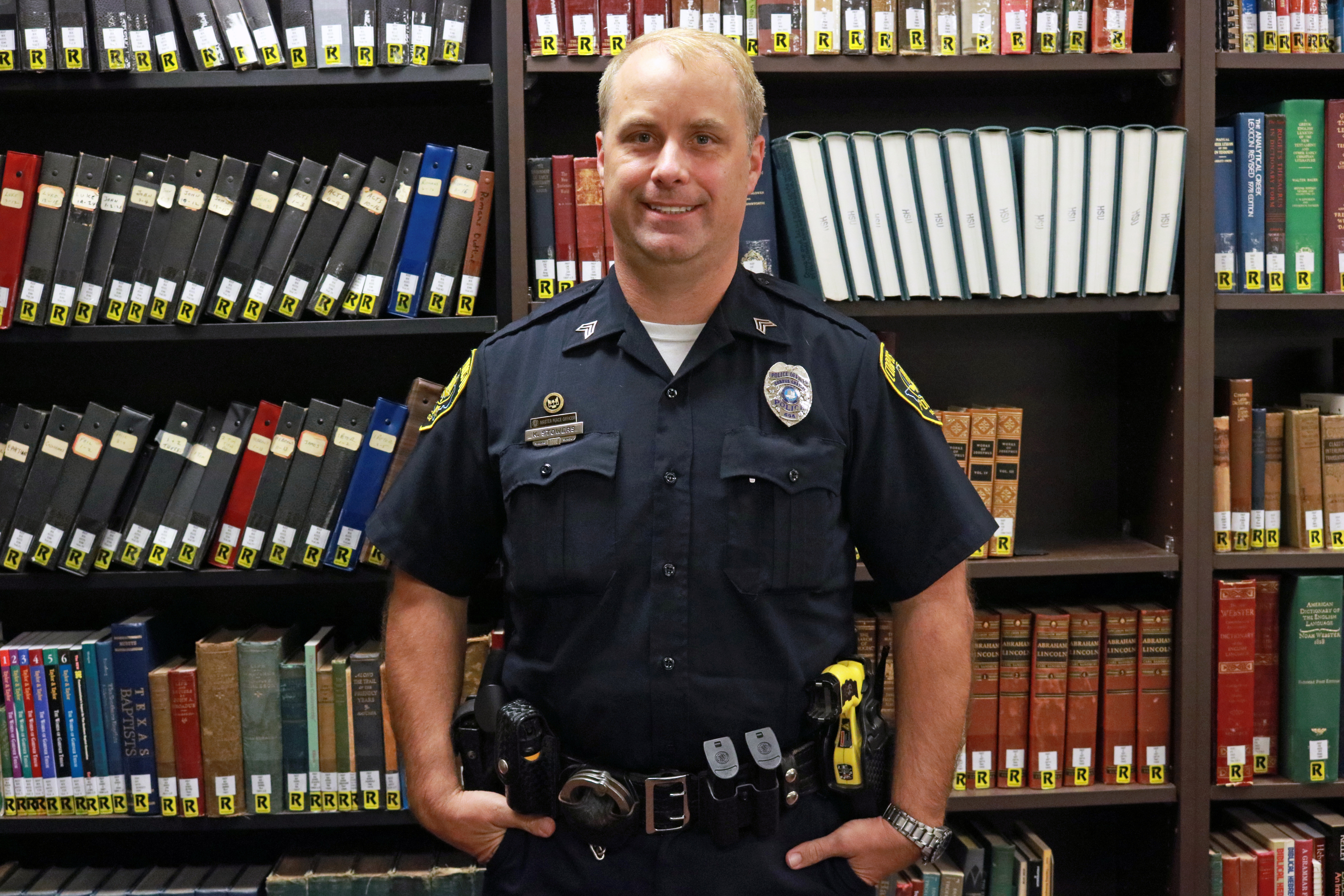 Following the First Responders Summit, SCS instituted the Police in Uniform Scholarship, also initially funded by Homes. A unique requirement for the Police in Uniform scholarship requests that recipients attend SCS classes in their work uniform. The presence of first responders in SCS classes not only grows the hearts and minds of public servants, but also provides built-in security for the campus. In January, Officer Kirk Stowers of the CCPD became the first recipient of this scholarship.

“We are grateful to Officer Stowers and all of our police officers for all they do for our community.” says Dr. Celelli.

Officer Stowers currently works as the CCPD Crime Stoppers Coordinator. His daily work includes managing public information requests and giving presentations about criminal investigations. Additionally, he serves on the board of directors for the Council of Alcohol and Drug Abuse of the Coastal Bend, as a Mental Health Peace Officer on the Crisis Intervention Team, and as a deacon at Travis Baptist Church.

Growing up, Officer Stowers had a loving childhood, but did not come to faith in Christ until an adult. As a teenager, his exposure to God came from an aunt who took him to church occasionally and from girlfriends that invited him to Young Life in high school. Even though Stowers admits, “he only went along to appease them,” he “is grateful for the seeds they planted.”

After graduating high school, Stowers joined the United States Army where he had a life altering experience that caused him to seek God and become a believer.

After his years of service in the military and as a firefighter, Stowers chose to stay in law enforcement believing it was his best opportunity to help others in the community. Employed by the CCPD since 2006, Stowers seeks to meet the educational requirements and opportunities for advancement within the department.

Officer Stowers pursues higher education not only for occupational reasons, but also because he wants his education to be meaningful to his life and work in ministry. As a result, SCS is the best fit to help him achieve his goals. He hopes to eventually attend Logsdon Seminary at SCS’s location to earn a Master of Divinity in the Spiritual Care track and do chaplaincy work.

Since attending SCS, Stowers says, "the most exciting part for me has been my spiritual growth....I am far more prepared and far more eager to learn and participate in Christian living."

Officer Stowers extends a personal invitation to his fellow officers:

"I encourage Emergency Responders to gain an education at SCS to learn about people management. Anyone in the emergency services occupations should think of the time spent with a person in crisis and how they could best help that person. One should consider the death notifications delivered, the families at the scenes of unattended deaths either by natural causes, or by criminal acts, the suicidal person, the person who feels worthless because of their life of crime, the homeless person who believes they have no value or the coworker who has become discouraged from prolonged exposure to the crisis in the community."

As a Christian and a police officer, Stowers is challenged daily to serve Christ as he serves others. SCS helps him to do both and he wholeheartedly agrees stating that, “the education at SCS provides the tools to provide hope to a lost world."SCS is grateful that Officer Kirk Stowers lives his earthly calling with a heavenly purpose.