Loving the lonely in Vancouver

By Sarah Wilson, Go Now campus missionary intern at the University of Texas

When I first arrived in Vancouver, I saw quite a few similarities to back home in Austin. There's a hustle and bustle, a time only for me, myself and I mentality. There are people everywhere, studying hard and partying harder. But as my eyes opened to the world around me, the similarities began to chip away. True, there's a sense of pride and accomplishment for being at this university, but there's also this loneliness that comes with that. It's not loneliness like I see back at the University of Texas. No, it's loneliness without a purpose.

As our supervisor says, “people are lonely, but not completely shut out to the thought of letting people in. It's as if they are longing for water but refuse to drink from the springs that surround them.” This has been an immense obstacle in our way. It has been a challenge just to begin a conversation, let alone hold one. We've been asked multiple times what our motives are even in simple things like getting lunch. Despite the discouragement, we continue to be faithful in what God is asking us to do, one of those things being Soularium Cards (a set of picture cards used to initiate conversations).

In the midst of figuring out how to make our way through this obstacle, we met a student named Jon. When he first approached our table, he was hostile and instantly put walls up. He began to question us, asking us why we were here and what our motives were. We told him we were just trying to meet people and listen to their stories. He told us he didn't believe in God so we could do nothing for him. We were taken aback by the aggression that was within him, not knowing what was behind that pain. We continued to have conversation with him, though, asking him about his life. He gave us one word answers, not giving us too much detail into who he was. It was a strange situation, but by this time, he had taken a seat at the table, pulled up his laptop, and began to work. 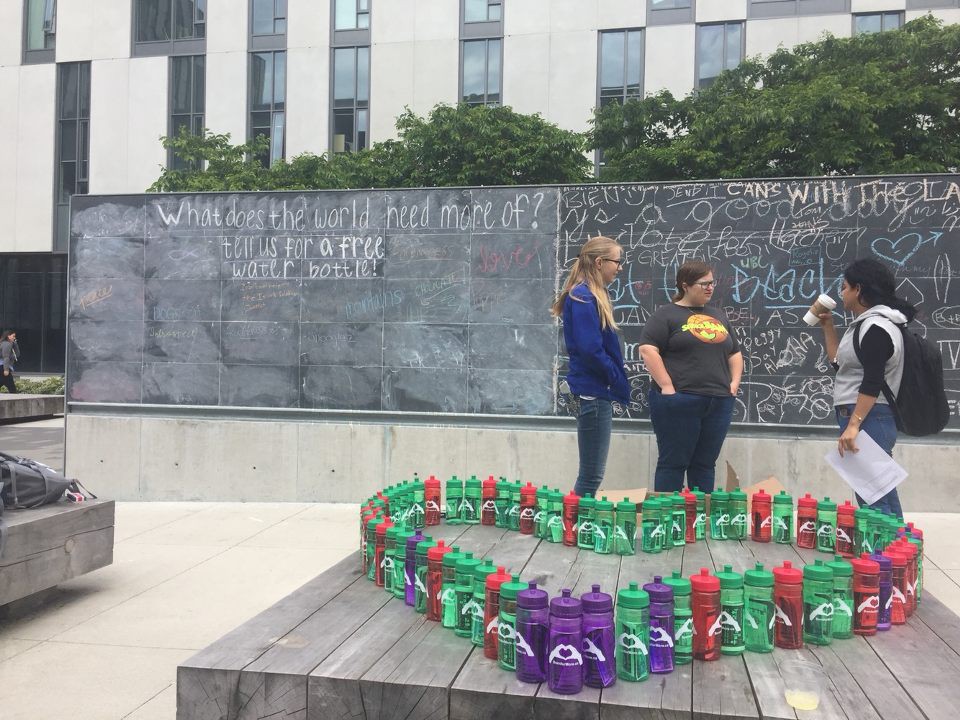 We were able to see how, although he was extremely skeptical of us, his desire to not be lonely had taken over. One of our teammates then invited him to our movie night that night. He said he'd try to make it, but wasn't for sure. We were also skeptical about his commitment to come, especially with the way he seemed to respond to the survey. Later that night, though, we got a knock on the door and to our surprise, it was Jon. He came in, said hello, sat on the couch, and began to work on his laptop again.

I remember sitting beside him and praying that even though he wouldn't talk to us, that he would feel loved by our presence. After the movie ended, he headed straight out the door without a word. Katelyn, our teammate, ran after him and began to talk to him. Through that conversation, Jon expressed how stressed and lonely he was because all his friends were gone. He had an immense weight on his shoulders and felt overwhelmed. He asked if someone could go with him to the library and Chase, another teammate, agreed to go. They spent a couple of hours there with minimal conversation and then went home.

We were all perplexed at this young man who seemed lonely but rejected friendship. We didn't know what to do, nor how to help. This was the epitome of the culture difference that we were facing. But it's through situations like this and through tough relationships, that we know God is working. God knows Jon. And God is developing our relationship with Jon as we build trust with him. Jon has agreed to meet with Chase and Katelyn this week for some coffee and is interested in hanging out with us for game night again. It's a small, simple thing, but it's given me hope that God is breaking through the culture of loneliness here, one person at a time.