by Guest Author on April 2, 2018 in Great Commission

For Spring Break this year, I decided to go to New York City. Not for a vacation or to sightsee, although I did get to do some of that, too. I traveled from Texas to New York with around 20 of my fellow Hardin-Simmons students of the Baptist Student Ministry (BSM) at our school. It was a part of the Metropolitan New York Baptist Association, or MNYBA’s, “Passport New York: A Collegiate Missions Experience.” It was described to me as a trip where we would go to NYC to do mission work and help local church planters with whatever they needed us to do. I hopped on board right away, as I love New York and have been wanting to go back ever since I went three years ago. I am going to be honest. I was just as interested in going because I wanted to be in New York, not just because I wanted to spread the Gospel like we are called to do in the Bible. God sure had a greater plan though! 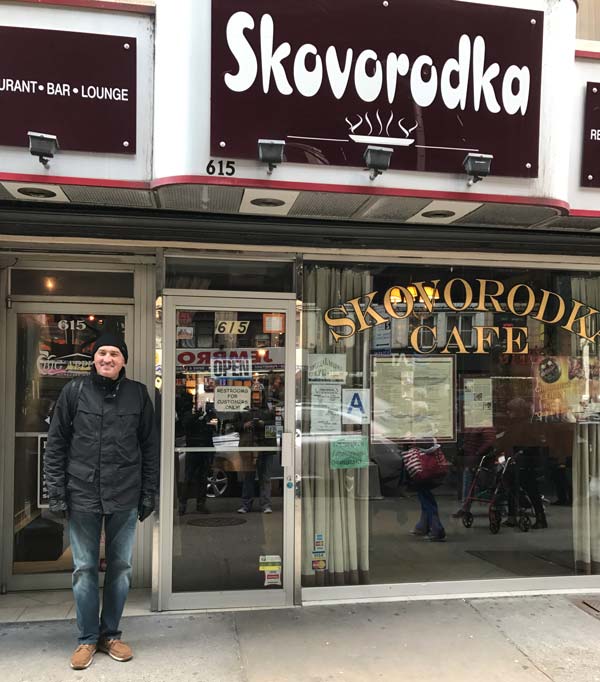 The week started out with getting settled in at MNYBA and meeting the people my team and I would be working with. My team was assigned to Pastor Slava and the Russian church. There were about nine of us with HSU and four from Mississippi – who we became great friends with. We had a little worship service on Sunday night, where we got to meet some members of the little Russian-speaking church, sang songs in both English and Russian, and got to hear a sermon from Pastor Slava. As everyone went to bed that night, I wondered exactly what we would be doing the whole next week – because that’s what we humans do best: wonder and worry about the unknown.

Bright and early Monday morning, we set out for Coney Island. The sweet and smiling face of Pastor Slava met us there on the boardwalk of Brighton Beach and we listened for his instruction.

The plan for the morning and afternoon was to split into a couple of groups and each go with Slava to talk to people that were walking by and ask them a few questions about their faith and beliefs. Since that area is heavily Russian, we came across many people that did not speak English, so that is where we really had to rely on Slava to translate.

We met and talked to one couple in their 70s and 80s and discovered that the wife was Russian. She told us about how everyone in her family died in the Holocaust except her, and how she feels that God has always looked after her. She said she lives life day to day and believes in God but does not have a strict religion.

Another man we met was a 90-year-old that was doing some fishing off of the pier. He said he was a bit of a skeptic of the church, as there are so many different religions and he has heard of bishops stealing money from the church.

Both of these encounters showed me how different these people’s lives have been from mine, yet God loves all of us the same. Since the day that we met the couple and the fisherman, I have prayed for them every day.

When you are doing missions and just talking to people on the street, it can be a bit discouraging because you have no way of knowing if you made any impact on them or if they are going to embrace God’s love after you leave them. I experienced this doubt and worry, but I also felt God saying to me, over and over, that they may not walk away from our conversation a completely changed person, but we have put the thought in their mind and showed them who we are. Now we pray for them. That’s really all you can do when you are evangelizing like this.

We visited many diverse and faraway-seeming places, like the Brighton Beach/Coney Island area, Jackson Heights, Corona, etc. throughout the week. It was so interesting to feel like we were in a different country with each area we went to. My roommate, Madison, also enjoyed seeing all different kinds of people and hearing so many languages in one city.

In a blog post she wrote up about the trip, she said, “To think that we serve a God who speaks so many languages and has the hearts of so many people from so many different countries is so awesome.”

The week flew by, getting to explore and see how God was working in the city. One day, we prayed in different parts of New York City. We prayed for the people in the area, for the church planters, and we thanked God for the freedom that this place represents, and the freedom we have in Christ.

Another day – one of my favorite days – we went to the Brighton Beach Public Library to grade papers that are sent to and from prison. It is called Lamplight Studies. They are Bible study papers that inmates have the opportunity to receive and send back to be graded. For each lesson, they have to read a certain chapter of a certain book in the Bible, answer questions and send it back to be graded.

That is where we came in. Several of us sat at a table in the library with red pens in hand and we sat and graded each paper, following the appropriate answer key. My favorite thing about this was that it showed me and my team members how God is reaching people that are incarcerated – essentially cut-off from the rest of the world. They are still receiving the Good News and learning about Christianity.

It also touched my heart to see how many people had written the name of a friend or acquaintance that they wanted us to sign up to start receiving the Lamplight Studies. This simple task of grading these papers remains one of my favorite memories from the trip.

Looking back on this amazing city full of life and diversity, I am reminded of a lyric from one of my favorite songs by Lauren Daigle: “Trust In You.” I have always liked the idea of this line, but I feel like I truly experienced it in New York:

“Your ways are always higher, Your plans are always good. There’s not a place where I’ll go, You’ve not already stood.”

This reminds me of what my BSM leader told us in the weeks that we were preparing for New York, that we were not going to bring God to NYC, He is already working there. That was so powerful to me, because I needed to realize that God is everywhere, not just in Texas with me and my school.

You can’t tell me that God isn’t working in New York. By the end of the week, after seeing so many kinds of people, all God’s people, I felt and still feel so inspired by The Lord’s amazing plan for the whole world: things are really coming together.