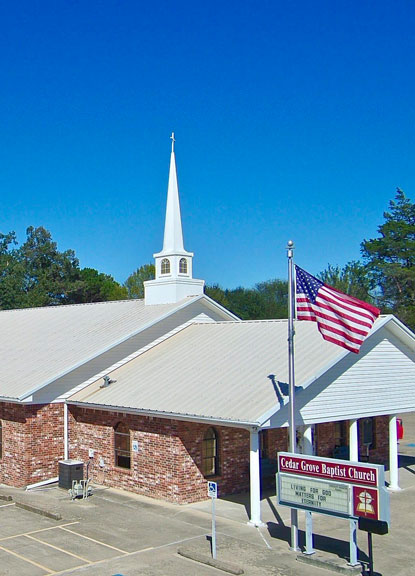 Last year, Cedar Grove was an outstanding giver to the CP, and according to Senior Pastor Freddy Mason, the church has no intention of slowing down.

Pastored by Mason for the last 52 years, Cedar Grove is passionate about cooperation between Baptist churches in Texas.

“Several years ago, I was preaching on tithing,” Mason said. “It got me thinking, if God’s people are called to tithe, shouldn’t churches do so also? The deacons and I talked about it, and we decided that the Cooperative Program would be a great place to start if we wanted to give as a church. We knew we were small, but we thought, how much more could we accomplish if we joined together with other churches?”

Cedar Grove faithfully gives its time and money to missions both at home and abroad. Some of the ministries it supports include Mission Carthage, STCH Ministries and Operation Christmas Child. The Cedar Grove Missions Team has also gone on mission trips in many Central American countries, including Guatemala, El Salvador and Mexico.

Not only has Cedar Grove given faithfully to the CP for many years, but they also have been involved with Texas Baptists through in-state mission endeavors.

Last fall, the late Daniel Rangel, then-director of the Texas Baptists River Ministry and Mexico Missions who passed away in October, spoke to Cedar Grove about needs on the Texas-Mexico border.

“I have to be honest. I’m a conservative man both politically and biblically,” said Mason. “So I wasn’t sure what to make of the refugee crisis on the border. But when Daniel came and opened my eyes to the physical and spiritual suffering there, I felt my heart change. All people count. Everyone matters.”

After hearing from Rangel, Cedar Grove sent a group of adults, students and children nearly nine hours south to a refugee camp in McAllen, TX. Before the team left, Cedar Grove held a church wide packing party where 1,000 hygiene kits were assembled for refugees on the border.

“When we got down there, we brought these kits and were so proud of them,” said Cedar Grove Youth Pastor John Pages. “Then we realized the need was so great that each kit had to be shared by an entire family. It was a really eye-opening experience, not only to see how much is needed on the border, but also how we take so many little things for granted like having deodorant or soap.”

The Cedar Grove team worked in McAllen for six days, providing for both the physical and spiritual needs of refugees and learning about God’s heart for all His people.

A history of passion for Gospel

Cedar Grove has been faithfully giving and going since it was founded.

Planted in 1905 by a group of mission-minded believers, the church was one of three in the Carthage area at the time. In 1935, the congregation funded the construction of a one-room, wood stove-heated building to host all the church’s services.

Cedar Grove continued throughout the mid-20th century with few modern conveniences. The church building lacked running water, bathroom facilities, air conditioning and a baptistry, but the congregation remained passionate about the Gospel.

“The church asked me to be their pastor, and I was surprised because I was still in college,” Mason explained. “I didn’t think that anyone would want me that quickly. I had spent a long time running from God’s call, but at that point in time, I knew ministry was where He wanted me, so I took the job.”

Since then, both the Cedar Grove church building and family have grown significantly.

“Some Sunday school rooms were added to the building when I came,” said Mason. “And many other renovations have been made. Our facilities are much better now. They work well for us.”

For many years, Mason was a bivocational pastor, something that created both challenges and blessings for the Cedar Grove congregation.

“I think having a bivocational pastor helped Cedar Grove members realize they must share in ministry. Many members took it upon themselves to provide food for the sick, teach lessons and serve. They still do that even though I now work full-time as a pastor,” said Mason. “They learned to love their neighbor as they served one another and God.”

“When we see the need, we help meet the need,” he said. “Any church that wants to become mission-minded can. You just have to build a mindset that there are people in need. If you look around, you’ll find there are always people who need help.”

Mason is excited to see how members of his church will continue to affect change in God’s kingdom through cooperative efforts with other Texas Baptists.

If your church wants to make a bigger impact together by giving to CP, click here.