by Jordan Corona on November 15, 2016 in Annual Meeting

One challenge for academic institutions, outlined in the discussion, was regarding making higher education accessible to students of all financial backgrounds.

That is a matter of consumer education, ETBU President Blackburn said. Educating students, as well as families, on the economics of higher education affordability is necessary.

“We all face the challenge of raising dollars where there are less,” Blackburn said. “We also see that students are coming to our campuses with their hands out. For the families we serve, 40 percent of the students are the first in their families [to attend college].”

HSU President Bruntmyer said the solution for many will be a diversified approach. 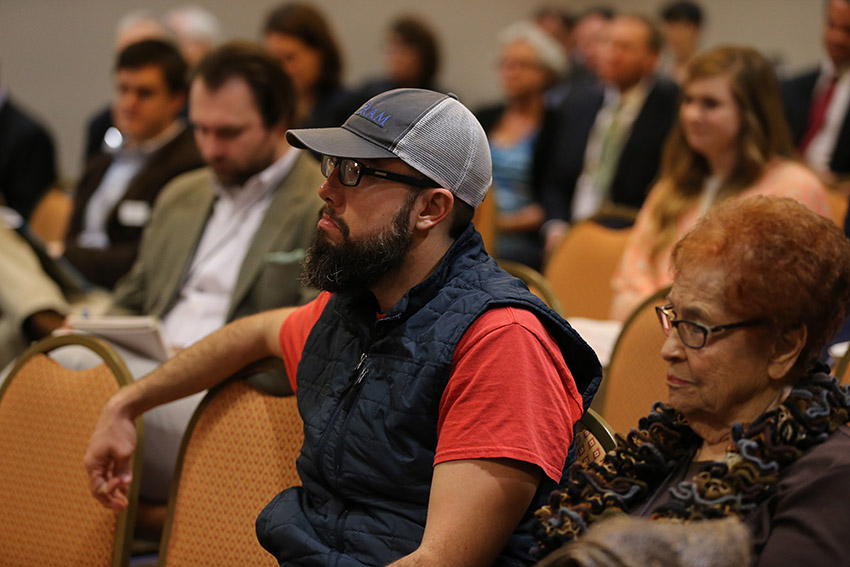 “You have to decide, ‘Will I save up? Will I work for it? Or, will I take loans,” Bruntmyer said. “You can try to get as efficient as you want to but the cost is the cost. I have found consistently people are being told not to take loans for higher education.”

Adam Wright, DBU president, said there are particular considerations families should take into account when it comes to making financial decisions for college.

“I would encourage parents to look at the percentage of student default and whether tuition rates are consistent over the years,” Wright said. “I do believe there is great value in Christian higher education.”

The affordability challenge facing universities is particularly pronounced for those families thinking about college for the first time.

“Christian higher education is a great place for first generation students,” Bruntmyer said. “My heart goes out to these young men and women.”

The conversation then shifted from college affordability to the Title IX, a government mandate for higher education institutions to proactively guard against discrimination.

“The train has already left the station,” Blackburn said. “We have a responsibility to be prepared for acceptance, inclusion and recognition.”

Bruntmyer said Christian higher education has a particular place in the national dialogue about sexual ethics and rape culture on college campuses.

“I receive all emails when incidents like this are reported,” he said. “We’ve also got an external adjudicator who to hear the situation and help make determinations.

“Society does not know how to deal with it,” he said. “I think society sees universities as a way to transform what’s going on. We‘ve got to make places safe for everybody on campus.”

“About one-third of our budget goes toward partnering with these institutions,” Vernon said.

According to one study, it is estimated Texas Baptists, through its partnerships with 27 institutions, reached nearly 11 million individuals each year.

Jordan Corona is a freelance writer for the 131st Texas Baptists Annual Meeting.