I made more than one trek across the grounds of Alto Frio Encampment on my visit during the 100th anniversary. Looking around, I wondered about all the memories created at every tree I passed, every stone that was set and every structure that was erected. The countless people that looked up at the stars also looked forward and dreamed of the lives that were going to be touched. I now look up and around and can almost feel the shadows of past lives that have been changed through their obedience. I wondered if all the campers had the same pause of amazement looking up at the vast array of stars, thanking the same remarkable Creator we both serve. 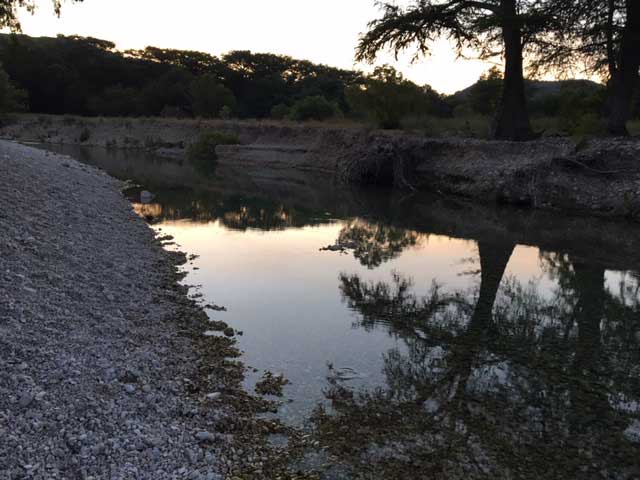 The history of founders Bruce Roberts and S.M. York is remarkable. In 1920, a late-night meeting between the two men of God birthed the dream of an encampment where future lives would be changed for the cause of Christ. It is the sacred candle-lit moments like that that open doors to what God has planned for us. They were truthful with themselves and with God, chose to proceed and were blessed for it.

During the 100th anniversary celebration, we were able to travel through the past and experience firsthand the fruit of this meeting. We remembered how much had to occur before Alto Frio Encampment became a reality. After that sacred meeting in May of 1920, these men brought their idea before the Del Rio/Uvalde Association. Catching the vision, and the land donated for the cause, the association unanimously agreed to proceed. Through more of God’s working, the land was prepared; a tabernacle erected; class pavilions were built; the kitchen, dining, and housing were built and furnished; and tents and cots placed. This was all completed between the time the agreement was made and the day the camp was set to open; two months and eight days—all without one cent ‘set aside’ for the job.

At first, Roberts and York figured the encampment probably would not amount to much because of the difficulties getting to it. Roads were bad, and anything that did exist would be washed out by any rain that would come. But it did amount to something—1,500 attended the first encampment. In the second and third years, bus lines were contracted to run attendees from train stations in Sabinal that were coming from San Antonio and points beyond. By the third year, there were 4,000 attendees.

I personally enjoy walking the grounds today and wondering what it would have looked like, that many people, and wish that the trees could talk; oh, the stories they could tell us.

Remembering those who have come before

Our celebration is filled with the stories of campers themselves. Stories of those star-filled skies speaking of God’s wonders, speaking to the hearts of every camper, of the awesomeness of who God is. Teenagers, attending and receiving the call of God, becoming young adults, then growing into adults. Going from being the soil and seeds to being the laborer and planting seeds into the lives of others. Every story has roots in an Alto Frio experience.

I learned that Alto Frio was a family event at first. As communication became easier, Alto Frio started Encampment Echoes, a mini-newspaper that was published daily over the 10-day encampment event. It was filled with the goings-on of the encampment, who was speaking that day, as well as past days’ numbers. It even had an advertisement section and introduction on who was new to the association.

It was amazing to see many examples of these newsletters as well as other memorabilia. Each item had its own story—its own message of “Remember When.”

It was astonishing to hear repeatedly that Alto Frio was a priority in many cases. There have been many changes over the years: faces, landscape, and expansion. Those like Lonnie Rollins have been around for half a century. If there is a story about Alto Frio, he knows it. He can tell you about years of snow where they were running a tractor-trailer to clear it and years when the pond was overflowing with water covering the island. He knows which lights around the camp are hand me downs from the Houston Rockets old stadium and what the legal street name is for each road in camp.

Alto Frio is known for its missionaries like S.M. York, but  is also known for its worship music. And who better to mention than Baylus Benjamin “BB” McKinney. As the writer of over 700 hymns and choruses, “Let Others See Jesus in You,” was one of his oldest hymns and popular to Alto Frio worship singers. “Brother Mac” as he was affectionately known, led worship services with his whole body and a passion for Christ, and he expected nothing less from those who sang in services. Two things BB McKinney was known for: teaching worship by coaxing the youngsters to join the choir by pitching washers with them before worship practice and for his devotion to members participation.

The early morning class was well attended and informal. Songs came from attendees or songs Bro. Mac wrote, followed by their stories. Once, he offered to take poems offered by attendees and composed the music around them. McKinney served for eight years until the Lord called him home in 1952.

Celebrating the camp’s past, present and future

Pastor Duane Mayberry of First Baptist Church Charlotte said it best. Change is the only thing that remains the same. Regardless of what comes our way, God is faithful, and Alto Frio is no different. Times change and seasons come and go, but the spirit of Alto Frio still remains. Great is the faithfulness of God. And it is by the continuation through men and women who are there today. Leaders like Rusty Brandon and Kim St. Clair are taking Alto Frio Encampment into the future. The speakers and worship leaders of today who minister to the new generation of attendees are the ones that will continue the movement of God.

Shane Pruitt spoke during the anniversary weekend out of the book of Acts. The Apostles movement in speaking about Christ, the movement of God that cannot be stopped. That is the spirit of Alto Frio, it was in 1920, and so it is today in 2020. From where two men agreed to bring an idea for a camp to a church meeting, to what Alto Frio is today, it has grown into a ministry where over 10,000 souls have come to the knowledge of Christ. The movement of spreading the saving message of Christ cannot be stopped.

Alto Frio echoes Pruitt’s challenge for believers. “God doesn’t desire to be a part of your life; He desires to be your life.” Until that day when we are all called heavenward, as another renowned Alto Frio speaker D.L. Lowrie shared with us that weekend from the book of Revelation, “God will wipe away every tear.”

Alto Frio has been, is, and will continue to be a refuge for renewal, retreat, and spiritual growth for all ages. 1920 was just the beginning of God’s plan. 2020 is just a stepping stone for what the future holds for Alto Frio Encampment. We praise the Lord, our Savior, for what He is going to do in and through the lives of future attendees.