BSM volunteers from across Texas help with Harvey Recovery 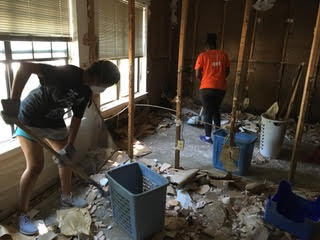 When they walked into this house, one thing was clear to the volunteers from the University of Houston’s Baptist Student Ministry: The homeowner was overwhelmed to the point of paralysis.

“There were dead fish in the house,” said UH BSM Director Shannon Rutherford. “The drywall hadn’t been taken down. No progress had been made yet, even though it had been several days since the storm.

“We asked the homeowners how they were doing. They just stared and looked like, ‘I don’t know.’ So we told them, ‘We can do this together. We can take this out and there is a plan to start over.’”

About 25 students from UH have been involved in BSM recovery efforts, going out to multiple houses and churches to pull out furniture, remove drywall and help homeowners sort through their belongings. Since Aug. 25 when Hurricane Harvey hit, 37 teams from 24 Baptist Student Ministries, totaling 714 students have worked on relief projects in Corpus Christi, Houston, Beaumont and the surrounding areas.

One of the churches UH students helped had an older congregation who couldn’t do that type of heavy labor, Rutherford said, adding that their work saved that church because if it had just sat there, it would have molded.

Rutherford was moved by the sweetness of the students as they worked.

“When they’re sorting through people’s treasures or taking down the walls from their children’s rooms, to see students very quietly step in there and start working, but being gracious in that process. It brings a little bit of life to that family,” she said.

Watching the way the Church came together in this time of crisis also had a great impact on Rutherford. 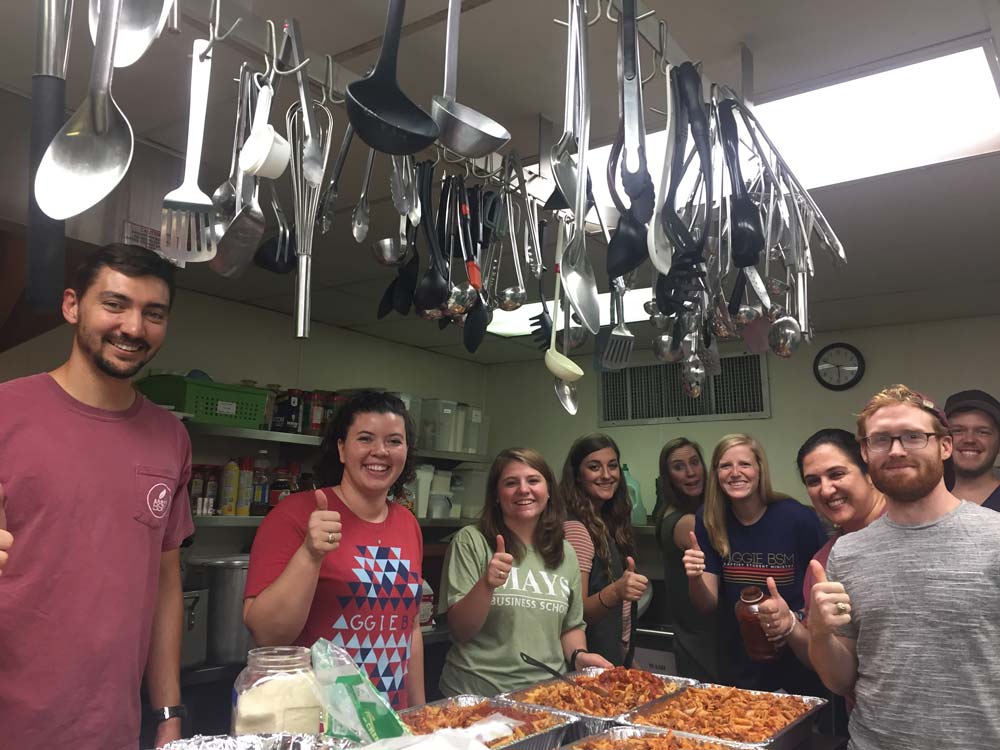 “Someone on radio said that 84 percent of the recovery work has been done by churches or religious groups," she said. "It’s amazing to think that the church has out-served FEMA or the Red Cross. The church has stepped up. Even that first week there were church groups coming by, asking, ‘Do you need something to eat? Do you need water?’ Maybe not everyone could pull out sheet rock, but there were even children who said, ‘We have a candy bar for you.’ Because everybody can do something.”

Another group busy with recovery efforts is the Aggie BSM from Texas A&M University.

“We’ve had volunteers come out to Houston, Kingwood and La Grange,” said Aggie BSM Director Joel Bratcher. “Working with students is awesome because they will mobilize really quickly. They are adventurous and they can go do something for a day and have the energy to do it.”

Bratcher said one of their projects was going out to Kingwood to help the family of two of their BSM students, he said. “We also helped some of their neighbors and had a team provide food for 90 workers and families all in the same day.”

He said they also did work in the Memorial area of Houston, where the destruction was so bad that it made him think of Hurricane Katrina.

“What really struck me there is that everything these people have is sitting in their front lawn. The things of this world really are temporary,” Bratcher said, adding that being the Body of Christ is crucial in times like these. “When people are at their lowest, what a great place to try to love and show help and concern. It’s hard work but it's a blessing to be able to help.”

“We helped this one guy who wasn’t a believer and he was really touched by the work the college students did. He said he couldn’t believe they were volunteering when they could be doing something else. It would have taken his family a week to do what a team of students did in a day. He was curious about our faith. You never know how the Lord will use all that.”