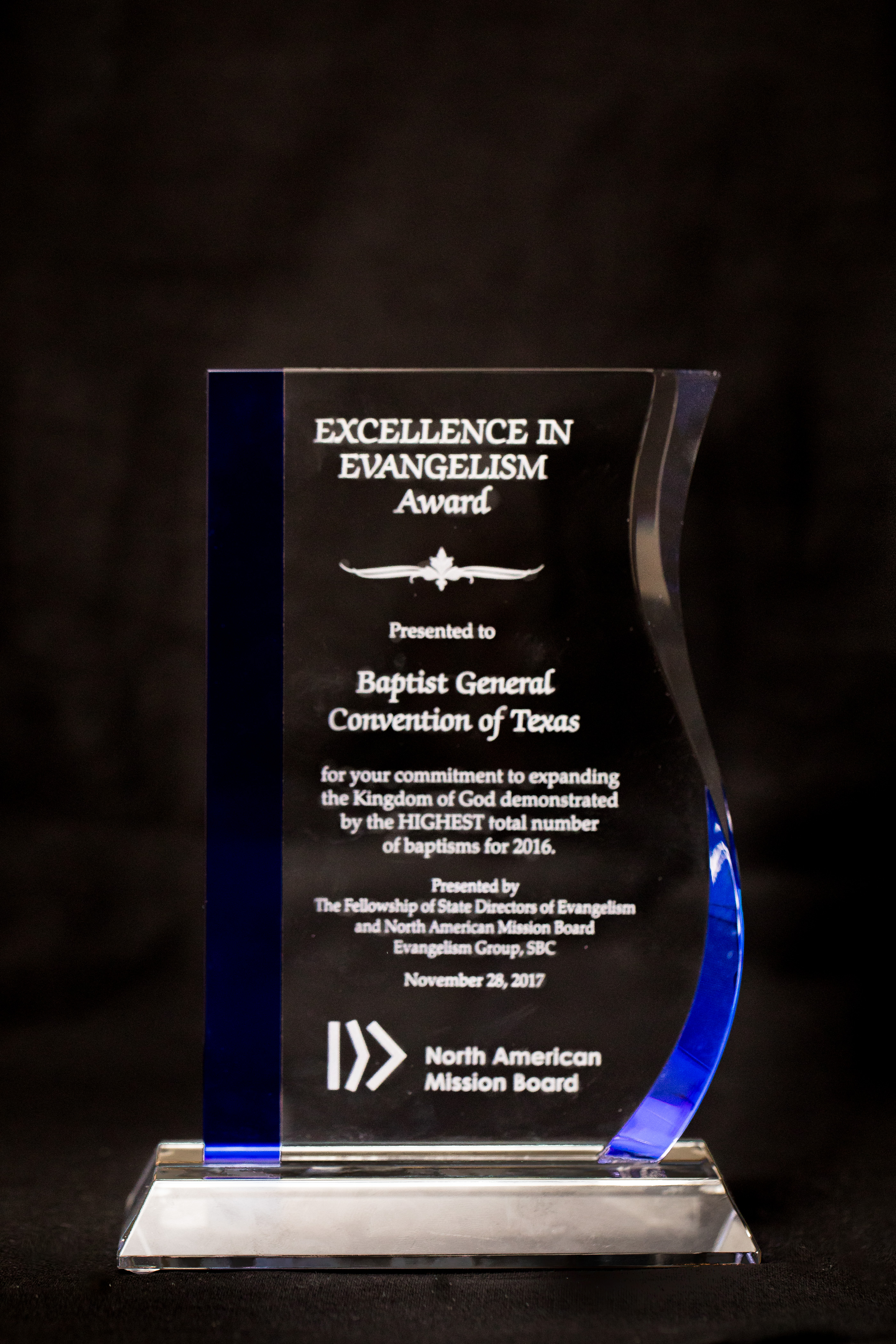 Texas Baptists was recently recognized by the North American Mission Board (NAMB) with an evangelism award for the “Highest Number of Baptisms” for the 2016 calendar year. Texas Baptists churches had a recorded 28,765 baptisms, making this the second year in a row for Texas Baptists to receive this national award.

The award ceremony was held in Las Vegas, Nevada, on Nov. 28, where Directors of Evangelism from other state conventions were in attendance. Leaders were able to discuss various evangelism techniques and look toward evangelism emphases for the future.

Effective Evangelism in a diverse state

Since Texas is the 2nd largest state in the country, Miller commented that there could be the supposition that Texas Baptists should naturally have the most baptisms. However, that is not necessarily the case.

“In Texas, it’s really like there are five different states that come together,” said Miller. “There’s a uniqueness about the many regions around Texas, and with that, you really can’t have one evangelistic approach.”

At Texas Baptists, the GCT works with churches to make their evangelism efforts most effective based on the church’s size, cultural background and available resources. Their work is as extensive as the state itself.

Miller continued, “I think that’s one of the strengths that we have as a staff - we customize what we do for the local church. It’s fun to do, it’s always unique and every church is different. We try not to be fixed in a box of any sort. If there’s something that really is above and beyond, then we try to give it a shot.”

A common question the GCT continually ask themselves when working with churches, presented by Atchison, is, “Given the cultural diversity of Texas, where here at Texas Baptists we do worship in 69 different languages, how do we adapt the resources we have to a particular people group so that they can use them effectively?”

Time and time again, the GCT has found that the most effective way to live out the Great Commission is through relationships.

“All ministry at its core is relational,” said Atchison. “And the thing we do more than anything else is to connect churches and resources with the people who need them, and to ask, ‘what’s working for you?’ As churches progress in stages of ministry, their specific needs will change and we connect them to those kind of things.”

He continued, “Our consulting is a specialized approach, it’s not a cookie cutter approach. As we go in to different churches, we build relationships with the people and the pastor, sometimes visiting them several times.”

The heart behind the baptisms

Baptisms are so much more than numerical data. At the heart of each baptism is a call to the Great Commission and the work of the Lord, Atchison noted.

“It’s exciting because this award is a reflection of the commitment of Texas Baptists’ churches to evangelism, that what is a priority to God is a priority to our churches,” said Atchison. “We got an award for bringing people into the Kingdom, and that’s significant. And for us, it’s an honor to represent churches who place a commitment on the Great Commission.

Miller closed, saying, “I think it says too that at the heart of what Texas Baptists are about, evangelism is important.”