Where God’s children gathered and were called to go

by Rebecca Egan on March 5, 2020 in Great Commission 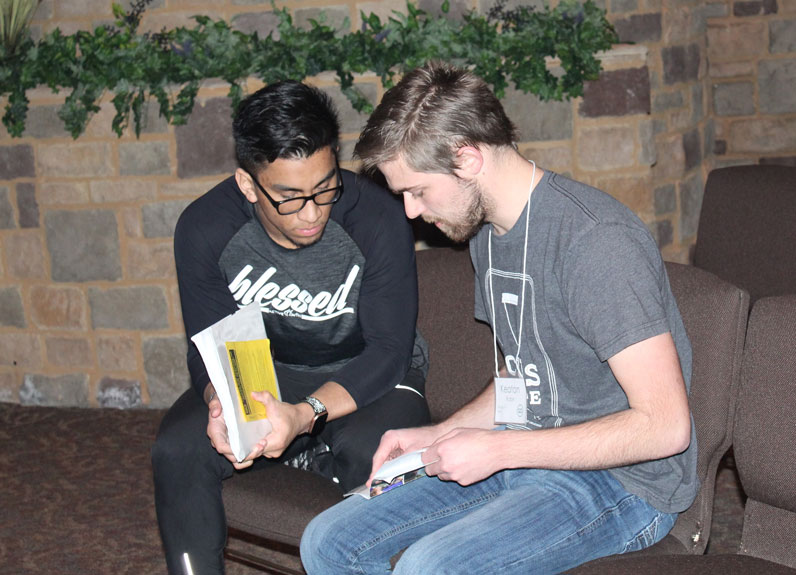 From Feb. 14-16, Go Now Missions hosted Discovery Weekend, a retreat designed to give student missionaries clarity on where they are being called to serve. Rebecca Egan, a student at Rice University, shared her experience.

Over Valentine’s Day weekend, college students from each end of the great state of Texas gathered in Midlothian after what was, for some, many hours of travel. After registration, students joined their assigned discussion groups for fellowship over dinner before large group worship. By ten o’clock, each group departed from worship and my car, full of students, headed down the curvy, bumpy country road to our host home. As we wandered deeper and deeper into what I perceived to be the middle of nowhere, I couldn’t help but wonder what I’d gotten myself into.

Our host family greeted us with smiles and snacks—the country farmhouse table splayed with cookies, chips and Dr Pepper in true Southern-hospitable glory. They explained they would be staying in their camping trailer for the weekend so that we could occupy the bedrooms and proceeded to help us set up spare cots.

Our group gathered for brief introductions, where I discovered I was the only student who was not a thoroughbred Texan. Our spirited discussion leaders, Grace and John, who currently serve as full-time missionaries in London, led a devotional before we retired to bed.

Saturday’s schedule began with breakfast generously prepared by our hosts followed by placement interviews and diving into Tradecraft by Larry E. McCrary, which would become our official how-to on all things missions. After watching the cattle pass the breakfast nook window while biting into a sausage gravy biscuit, I felt a bit out of place as a self-proclaimed urbanite.

Following lunch, we headed to the hosting Baptist church for the missions fair, where we searched for God’s calling. We listened intently for Him to speak through the mouths of mission leaders who shared passionately about their projects. Dinner and recreation time followed, and as the night came to a close, each group member spoke to the spiritual gifts we had observed in one another. Hearing from my peers how they had seen God calling each of us, was as touching as the voices of students, parents, volunteers and leaders joining in praise during worship earlier that evening.

Back at our host home, my group indulged in a lively game of Uno, luring even the participation of our hosts’ children, Grace and John. Alarms went off early Sunday morning, and we wearily stumbled to repack our belongings before the final worship service and goodbyes.

My expectations for the weekend included services of heartfelt worship, time to pray and to listen to our Maker and sermons that left us giddy to go out into the world and serve Him. All of these were met. However, I did not expect to bond with other students who had been strangers only days prior. I did not anticipate confiding in one another about the ways in which we feel convicted, tempted and blessed. “For where two or three are gathered in my name, there I am among them,” (Matthew 18:20). God was there at 1 a.m. in the dining room among scattered Uno cards. He was there that afternoon when we prayed to be called to a people, that evening when we prayed for each of us to mature in our journeys of faith and when we prayed the next day for safe travels home.

By the time we sludged our duffles into the trunk and bid adieu to our gracious hosts, I had become somewhat admittedly fond of the grassy fields we had passed back and forth between our host home and the church. I had been called out of my comfortable metropolitan mindset that weekend. Called to be among other believers. Called to hear the messages of returned missionaries and called to go and serve this summer. God calls us in such ways that the urbanites may be pulled to the outskirts and the country-dwellers may be drawn to the cities. Texans and non-Texans alike, we are one in Him.

That weekend, campus missionary interns (CMIs), BSM directors and local volunteers, among many others, funneled their time, prayer and wisdom into a process of discovery and contemplation. The heart of our hosts showed through the meals they prepared and the sacrifices they made for our comfort. We were served lovingly, such as God has called us as student missionaries, to scatter and share His truth and love. My appointment to serve on the

Impact Amazon Medical Team this summer in Brazil will surely draw me further from my comfort zone, but with the support and prayers of old and new-found friends and guidance from the Holy Spirit, I will be prepared to “Go and do likewise,” (Luke 10:37).