Beyond the bars: new ministry focuses on the forgotten members of the prison system

by Bonnie Shaw on August 26, 2019 in Great Commandment

Correctional officers and other employees of the prison system have often been overlooked by ministry efforts for years, despite the fact that they are in desperate need of Jesus’ love and mercy. Jim Young, coordinator of Restorative Justice and former prison chaplain, saw this problem and began looking for unique ways to minister to these officers.

He said, “What I saw was we were doing a lot of things for the inmates… but [we] would walk right by the officers and not even say ‘hello.’”

Young and other members of Texas Baptist Men (TBM)  began speaking to the correctional officers. They found an amazing opportunity to share the love of Jesus. Desperate to help the officers, who face staff shortages and long overtime hours, the TDCJ Institutional Division director, Lori Davis, even approached Young personally and asked him to minister to her guards throughout Texas. They were being invited to share the Gospel with over 5,000 officers across the state.

TBM jumped at the opportunity. With the help of the Mary Hill Davis Offering, they have been able to host appreciation dinners for correctional officers around the state. These appreciation dinners boost morale and offer encouragement to demoralized prison employees, but they also give local churches an opportunity to connect with officers.

TBM provides a meal and either a Bible or a devotional book, and they partner with churches in the surrounding area for additional volunteers. The local churches then invite officers and their families to upcoming events and services, forming bonds that will hopefully lead to deeper relationships. 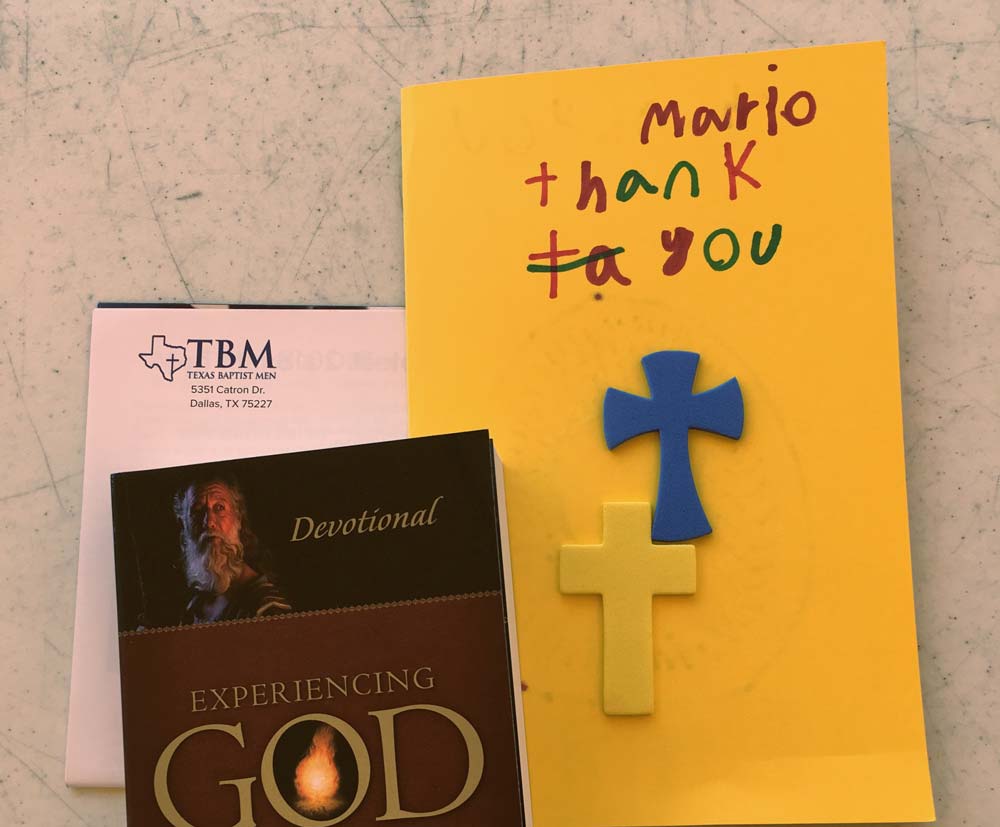 In addition, the children of the churches make thank-you cards to distribute to every officer.

Young explains, “One of our goals is to say thank you, we appreciate you.”

Small acts of appreciation like these lead to better morale, which can lead to better retention rates at prisons, leading to safer working conditions. It is important to Young and the rest of Restorative Justice that these officers have their physical and emotional needs met as well as their spiritual ones. Young emphasizes that this isn’t just about meeting work needs either. “Our officers need help with their children and their marriages [too],” he explained.

Switching between being stern and highly disciplinarian to affectionate can be hard, especially when the officers are berated or abused by the inmates. This can put a strain on their home lives, which is further worsened by staff shortages.

Because the job is so emotionally taxing, most potential prison employees in Texas only take jobs in the prison when the oil fields are not open. This means that during seasons of high oil productivity, those working in the jail are forced to work more overtime and in unsafe situations where inmates vastly outnumber the guards. This can lead to physical danger as well, as was the case for one correctional officer who was killed last year when he was forced to supervise a dangerous inmate alone due to understaffing.

These emotional and physical hardships can create an almost toxic environment for prison employees. Furthermore, the local community is rarely supportive of their work. “No one ever says thank you,” one correctional officer said to Young. “Nobody really wants to know what I do.”

The first week of May is National Corrective Officer Appreciation Week. This past May, Restorative Justice hosted three appreciation events in Beaumont, Abilene and New Boston. Three prisons have already signed up to have appreciation dinners next year.

Young says that one of the biggest challenges facing the new corrective officer ministry is simply lack of awareness. Many churches have prisoner outreach programs, but  Restorative Justice is working on getting churches to think about staff ministry as well. They also need love, care, and the grace of Jesus Christ.

In the 1990s, Texas Baptist Men began to reframe their prison ministries to include not just the prisoners and their families, but also the correctional officers, administrators, and other employees of the prison system. Restorative Justice, a TBM program designed to reflect biblical principles and repair the harm caused by crime, was born.

During one of Young’s visits to a prison, an officer approached him. Like so many other correctional officers, he talked about the hardships his jobs presented and the lack of appreciation in the community. The officer looked at the volunteers going to visit the prisoners and frowned, saying, “No one’s ever given me a Bible.”

Click here to give to the MHD Offering to support missions and ministries for discipleship and church multiplication across Texas. Click here for promotional materials to share about the offering in your church.