INDEPENDENCE – On Sunday, Oct. 11, Charles R. “Chuck” Dooley, former church planter for Texas Baptists, and D.L. Lowrie, pastor emeritus of First Baptist Church in Lubbock, received the Texas Baptists Legacy Award at the historic Independence Baptist Church. The two recipients were chosen by a selection committee for their lifelong commitment to Christian service throughout their work and ministry.

Due to COVID-19 precautions, the two were honored in separate services with family and close friends in attendance. David Hardage, executive director of Texas Baptists, preceded the recognition by delivering a sermon from Psalm 78:72 on integrity of heart.

“It’s always been important to be shepherds who have integrity of heart,” he said, explaining that Christians should be constant in their actions and words on Sundays and weekdays, in church and in the world.

Furthermore, Hardage encouraged those in attendance to do their work with skillful hands, using the talent that God has given them and building it up with work and practice. He explained that God calls Christians to be consistent and have integrity in their work.

“It is not our purpose to impress people with the skillful work that we do as ministers, it is our purpose to please God in who we are and what we do,” he said.

Hardage concluded his sermon by thanking Dooley and Lowrie for being examples of working with integrity of heart. He acknowledged that the day may not look the same as it has in years past, but that the heart of Legacy Day was there in full.

“Things are different, but in other ways things are very much the same. We always try to be very intentional about understanding two things on Legacy Day. We try to be intentional in recognizing that this is the Lord’s day and the Lord’s house, and our first objective is to glorify him,” Hardage said. “But we also understand that today we have gathered to recognize two individuals in Texas Baptist life who have made a tremendous impact and have established a wonderful legacy for all of us for the years ahead. ”

An example for the next generation 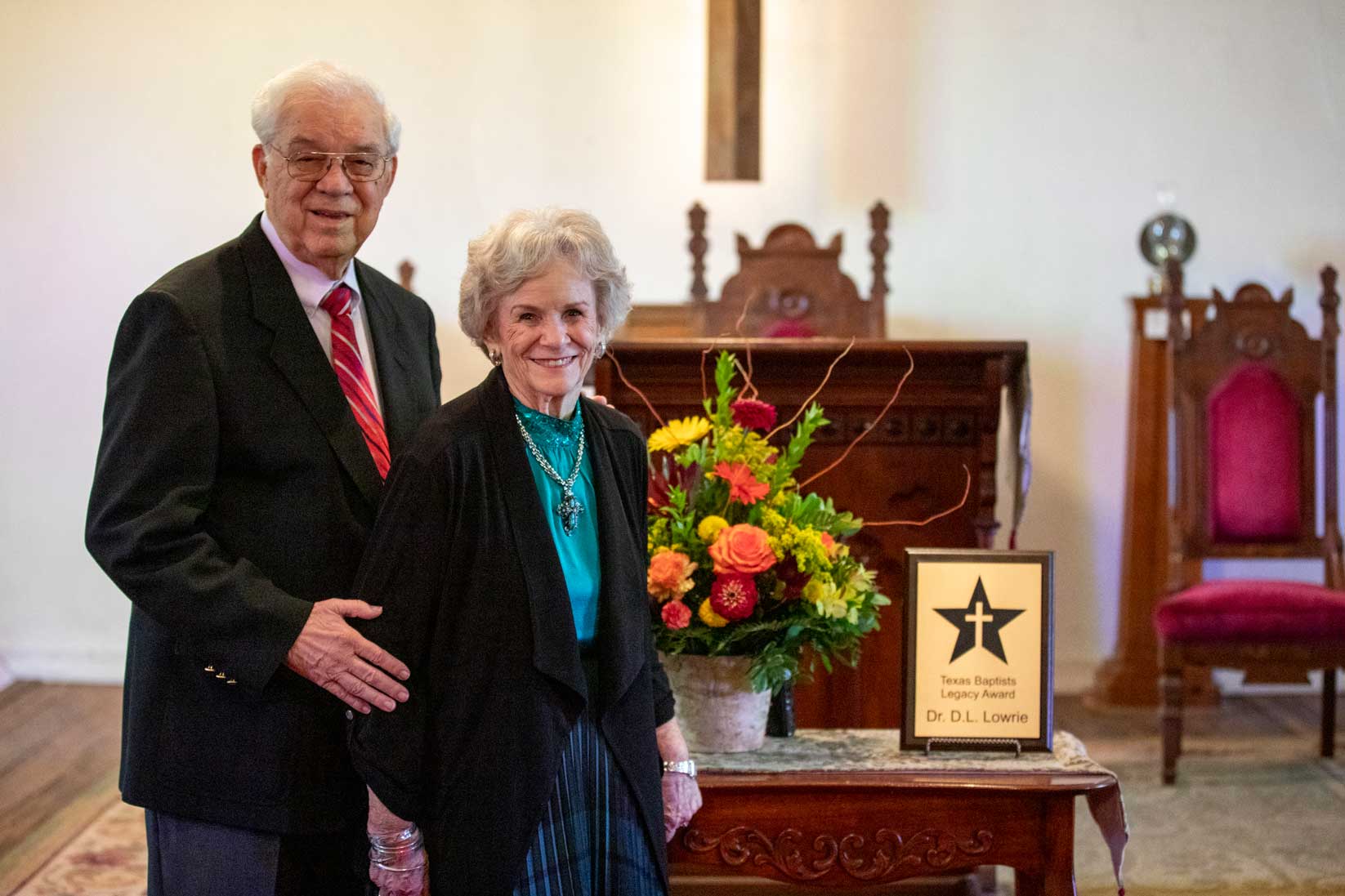 The first recipient of the 2020 Texas Baptists Legacy Award, Lowrie served as a pastor, convention leader and professor during his over 60 years of ministry. He has spoken at evangelical events around the world and has written articles for a variety of Christian publications. In addition to pastoring eight churches, Lowrie also served as the president of Texas Baptists from 1981-1983 and in a variety of other denominational roles.

Lowrie’s oldest son, David shared about Lowrie’s legacy and the important contributions he has made to the convention and the people who know him.

“The church was always his highest calling. He understood that the greatest position any Texas Baptist can hold is to be the pastor of a local church,” David Lowrie, pastor of First Baptist Church of Decatur said. “And he did all those things because he understood that the work of the BGCT is not the work of the convention, it’s churches pulling together for a greater cause and being the Kingdom of God. And so as a pastor he gave himself to the work. It’s my prayer that the next generation of pastors will understand that we do far better when we are together and will follow the example that has been set for them.”

David Lowrie also explained that one of the best legacies Lowrie will leave is his impact on others.

“When we think about his legacy, without doubt one of the greatest gifts Dr. Lowrie will leave is his influence on other peoples’ lives,” he said.

Dooley was also presented with the 2020 Legacy Award. Dooley’s ministry spans over five decades and includes six full-time pastorates, 23 intentional interim pastorates, 10 years of ministry with the North American Mission Board and 21 years as a church planter with Texas Baptists. He is the founding pastor of Alamo Heights Baptist Church, formerly Westside, in Port Lavaca; Fellowship of Champions in Spring; Sawdust Road Baptist Church in The Woodlands; and West Conroe Baptist Church. 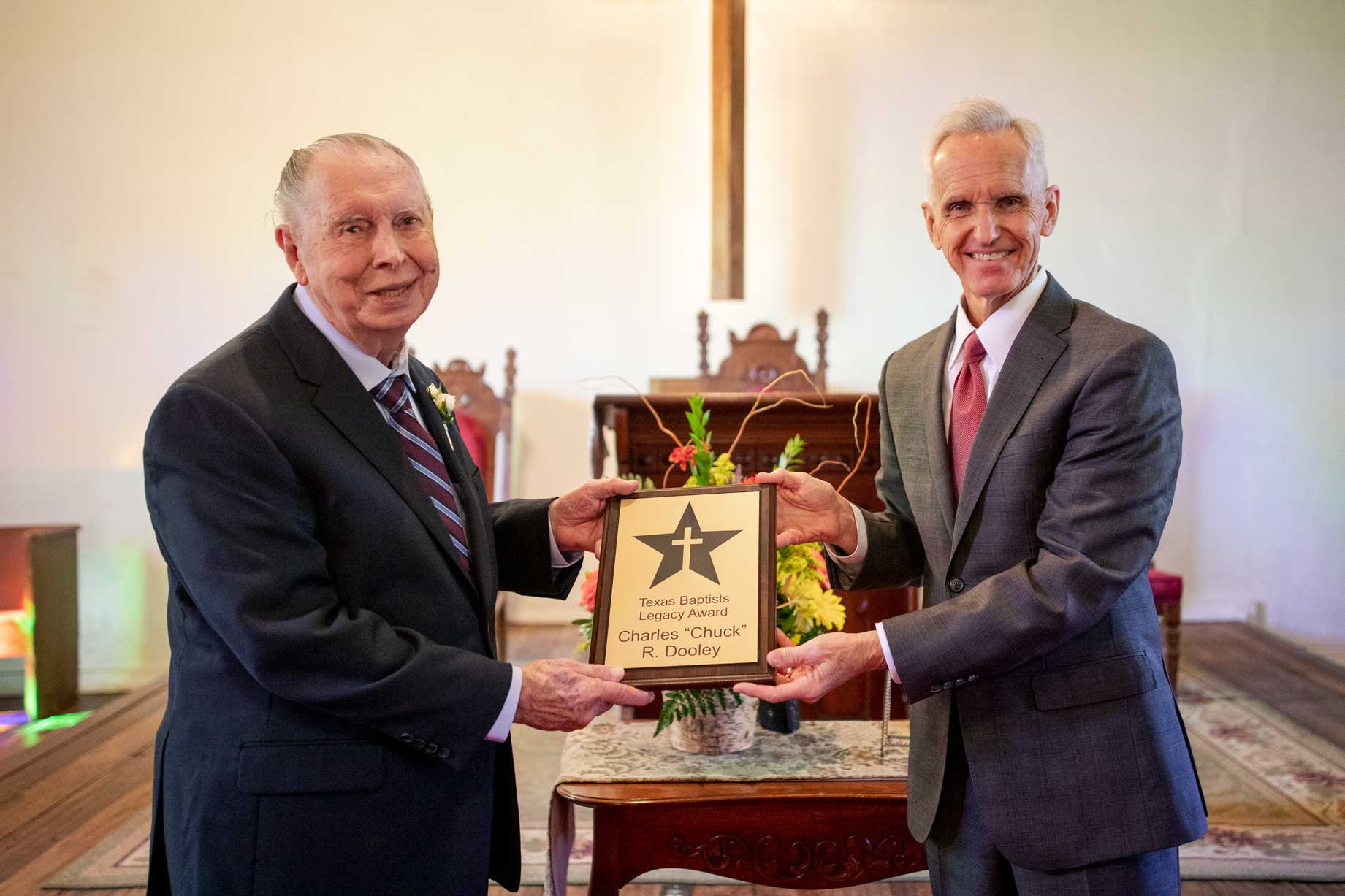 Debra McCammon, one of Dooley’s daughters, shared about the impact he has had on those around him.

“As we grew in our personal relationship with the Lord, my dad led us by his faithful example and consistent lifestyle. He was always the same man at church as he was at home,” McCammon explained. “He taught me the importance of keeping your word, working hard, serving the Lord with a humble and joyful spirit, but most of all about always giving your best to the Lord and His people. He taught me to trust the Lord to lead me through the tough times as well as the good times.”

Dooley felt the Lord’s call to the preaching ministry at 16 years of age, and he preached his first sermon soon after at Trinity Baptist Church in San Antonio. After over five decades of ministry, he retired from Texas Baptists, but remained active, serving as an interim pastor of eight churches and serving in leadership positions at his membership church, RiverPointe Baptist Church, which he helped plant.

“We are so very proud of all he's accomplished for the Lord and for the way he has continued to lead his family by example to serve the Lord,” McCammon concluded.

Carrying on the legacy

Pavers commemorating Lowrie and Dooley were laid in the church courtyard. Flowers were gifted by Dallas Baptist University for both families.