DALLAS–During the September meeting of the Baptist General Convention of Texas Executive Board, directors approved numerous recommendations including the proposed 2018 budget, the sale of The University of Texas Baptist Student Ministry property and a loan for the Baptist University of the Americas.

The proposed budget, which will be presented for approval by messengers to the Annual Meeting Nov. 12-14 in Waco, totals $37.135 million and includes $29.6 million from Texas Cooperative Program, $4.65 million from investment income and $2.88 million from other revenue sources. Jill Larsen, CFO and treasurer, noted that giving is strong and the 2018 budget is even with that of 2017. 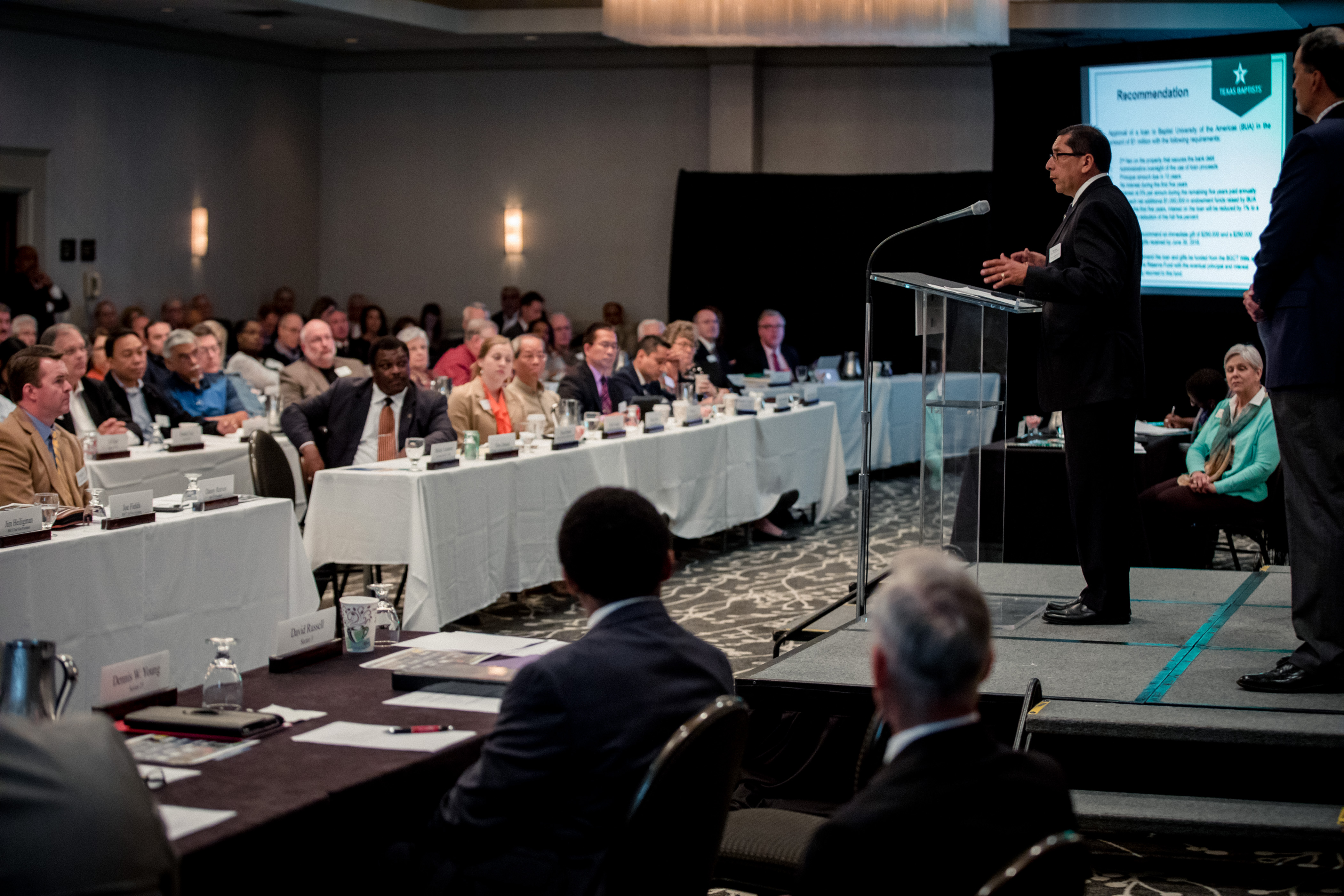 Gerald Caldwell, chairman of the finance committee, brought a recommendation for the sale of UT BSM’s property. The recommendation allows for the sale of the property, and for the BSM to purchase back 12,000-14,000 square feet of space within a new development on the property. Net proceeds from the sale totalling $3.8 million will be invested in an endowment to fund the future ministry of Texas BSMs.

Additionally, the board approved a $1 million loan to BUA, with an additional $250,000 gift and a matching grant of $250,000, to be made available should matching funds be raised by June 30, 2018. At the request of BUA’s new president, Dr. Abe Jacques, the money will be used to ensure the university is positioned to further its mission of forming cross-cultural Christian leaders.

“I’m new to the scene but not new to the issues I was made aware of as I was going through the [hiring] process,” said Jacques. “I’m not the answer to BUA, Jesus is the answer, I am simply a servant sent by the Lord.”

Executive Director David Hardage noted the precedent set 30 years ago when the Convention provided financial support to Dallas Baptist University during a time of need at that institution.

Board members also approved a recommendation to change the relationship between Baptist Community Services, a partner institution in Amarillo, and Texas Baptists from an affiliated agreement to a special agreement. Steve Dalrymple, president and CEO of BCS, noted this would not change their cooperation with Texas Baptists, but rather would open opportunities to partner with more businesses and agencies for ministry in the Panhandle. Final approval for the change will be voted on by messengers at the Annual Meeting in November.

Drawing from Romans 13:11-12, President Danny Reeves encouraged directors that even in the midst of chaos it is important to stay convinced that Jesus Christ is coming again and it could be very soon. 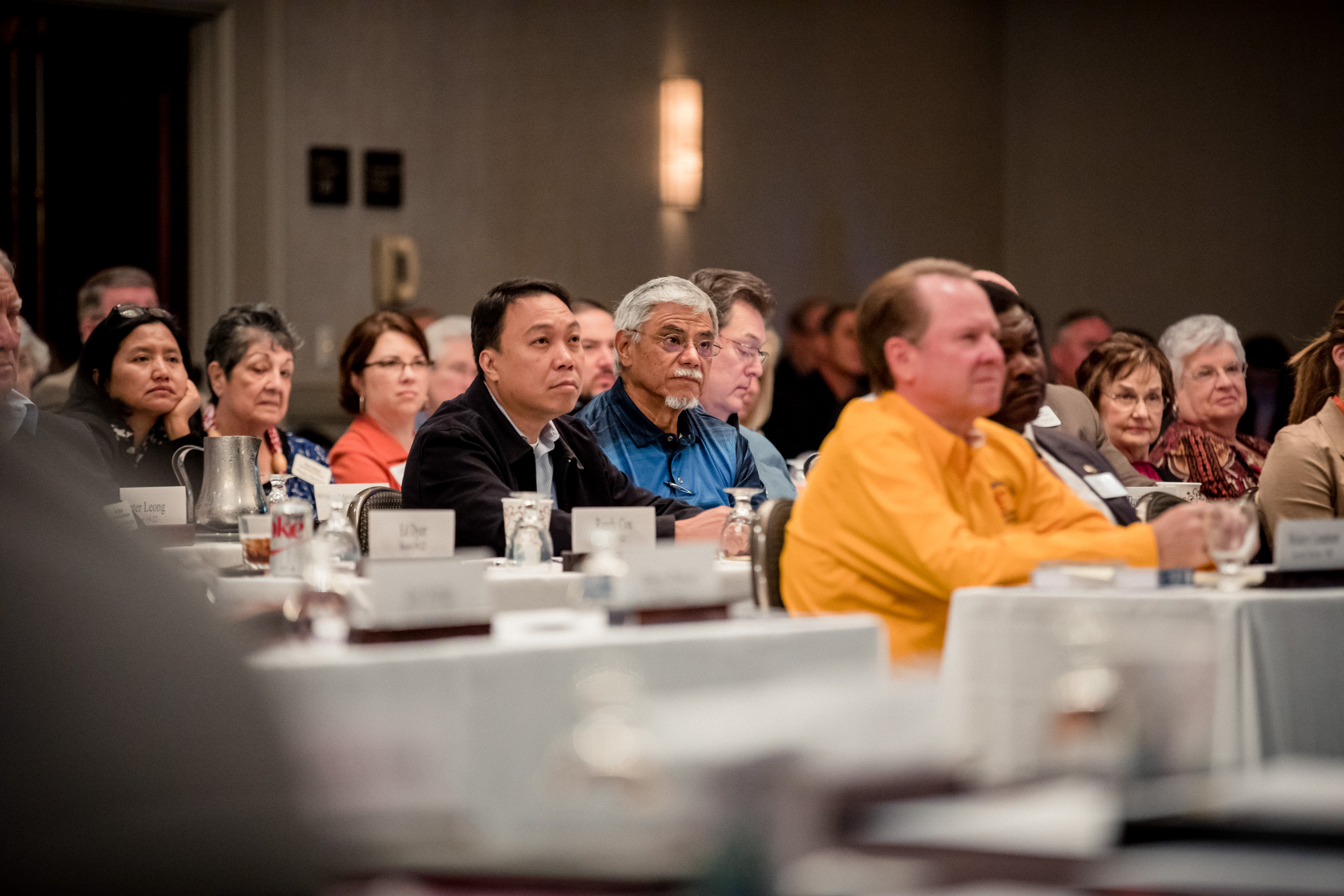 “Stay centered on Jesus, stay compassionate on the people around us and stay convinced the end is near,” Reeves said.

“God uses our volunteers to work on physical and spiritual matters,” Lenamon said. “We were able to hand out Bibles. We don’t ask if you are a Christian, we ask if you are believer. We want to plug them into a local church that can disciple them.”

Directors were encouraged by Carolyn Porterfield, WMU of Texas interim executive director-treasurer, to support the Mary Hill Davis Offering for Texas Missions. Porterfield noted all gifts given above the $3.6 million goal for 2018 will be designated for Hurricane Harvey recovery efforts.

Associate Executive Director Steve Vernon shared about the upcoming 2017 Annual Meeting in Waco on Nov. 12-14. Highlights include keynote speakers Will Mancini and Delvin Atchison and more than 20 workshops centered around the Great Commandment and Great Commission. Vernon also introduced a partnership between Texas Baptists and 21st Century Wilberforce Initiative for Speak Freedom Texas on Nov. 5. He encouraged churches to set aside time for prayer and awareness-raising for the persecuted church.