by Texas Baptists Communications on April 5, 2019 in News

“The most profoundly positive and powerful form of advocacy is advocacy for the gospel of Jesus Christ,” Gerson said to approximately 200 attendees to the two-day event. Advocacy Day is designed to provide attendees an opportunity to learn more about public policy, and find ways to get involved.

Gerson spoke not of red waves or blue waves, but of the cultural waves that “political figures ride or fight.” He identified several trends, and described ways in which Christians should respond.

Polarization, confirmation bias, and dehumanization are three trends, Gerson said, that can be damaging to public life.

“We live in a landslide country. Americans are self-segregating in a variety of ways...and our views of the opposing camp have become progressively more negative,” he said.

Gerson listed the growth of partisan media, the power of technology, and gerrymandering as possible contributors to the political polarization. The result, he said, is “the careful weaving of cocoons” where “other ways of life are unimaginable.”

In order to resist polarization, Christians must adjust attitudes. Christ-followers, he suggested, should know, “both the inside and the outside of our group, finding love and sympathy for both.”

Confirmation bias, Gerson found, resulted not from ill-informed voters but from people seeking solely to support the views of their own tribe.

“Group commitments,” said Gerson, “can often have more power than reason itself.”

The apt response, according to Gerson, is a willingness to call out one’s own side -- not the other side -- and “make a fair judgment, no matter who it benefits.”

We must confront confirmation bias in ourselves, Gerson said. We tend to see an enemy, when we really need a mirror.

The third trend, the “destination of our divided politics,” as Gerson described it, is dehumanization. There is no denying, he said, that dehumanization has become part of our political discourse.

Comparing dehumanizing rhetoric to the founding principle that all are created equal, Gerson fears a lesser ideal will take hold, invade, and change us for the worst.

“A failure of empathy,” he said, “is ultimately a moral and spiritual matter.”

Moral formation and the Church

In the face of these trends, Gerson said, the nation needs healing. Religion, he pointed out, has historically been a source of such healing. Today’s Christianity, however, has lost cultural standing, and faces “the worst kind of discrediting hypocrisy.”

“Civic engagement is in some ways one face of the Church to the world, and it is a grave matter when that face is a snarl or a sneer,” he said.

Gerson put the blame squarely on the Church for the failure of the moral formation of its members.

He suggested political engagement should be rooted in Christian ideals, and achieved by teaching theological principles boldly and clearly within the church, to the people in the pews.

Four requirements for a distinctly Christian approach to social engagement, Gerson said, include a certain anthropology, a commitment to the common good, the idea of the Kingdom of God, and remembering our history and recovering our heros.

Where soteriology and ecclesiology, though important, have no place in politics, said Gerson, a Christian anthropology, “a transcendent vision of human rights and dignity,” has appealed to activists of every generation.

Cruelty, bullying, and oppression, he said, are cosmic crimes, and people of faith must carry the message of human dignity, from conception to natural death, across every barrier and border.

Jesus preached the arrival of the Kingdom, a message of hope and liberation. Believers are called to be ambassadors of that Kingdom, Gerson said, and “the nature of this Kingdom determines how it is properly advanced.”

“The proper role of Christians in politics,” said Gerson, “is not to Christianize America, it is to demonstrate Christian values in the public realm.”

People cannot be the leaders they need to be until they have remembered who they once were, Gerson said. Without historical examples of compassion, Gerson said, we cannot move forward.

Faith, Gerson said, calls attention to a hopeful alternative to the current negative climate. Compassion and generosity, he said, can break down the walls of discontent.

“When the representatives of Christ act like Jesus,” said Gerson, “true influence returns.” We must love our people more than our principles.

Discussion on civility and community engagement

Gerson pointed out that the economy is historically good, though Americans face a number of deep challenges. Mobility, or the ability for citizens to rise, he said, is harder here than in many other countries. It should bother people because this is linked to hope, he said.

Evans, discussing challenges he sees as a pastor engaged in community development, said that society is getting dangerously close to re-segregating ourselves.

Addressing broader Christianity today, Gerson noted that character in an elected official such as the president used to be more important than it is now. Our views today, he said, are largely a function of our politics and not our faith.

He called for the church to be a clear and prophetic voice, rather than a tool in the influence of others.

In the midst of polarization, Gerson called on young people in attendance to build coalitions around issues. While every moment seems permanent, it is not. While these issues are deep and real, Gerson said, we have been divided before.

Evans added that believers must understand their motivation to serve.

“When we establish those ‘whys’ for ourselves, our lives become purpose-driven,” he said.

Evans, drawing on his time of service with Mansfield ISD, said that, “It’s one thing to point a finger at the council-member, but it’s another to get elected, put a pen in hand, and write to bring into being practical ways of helping others.”

He encouraged attendees to consider the question, “What does Christ mean to you?” Then, once answered, lead and advocate with passion.

Detailing the work of advocates 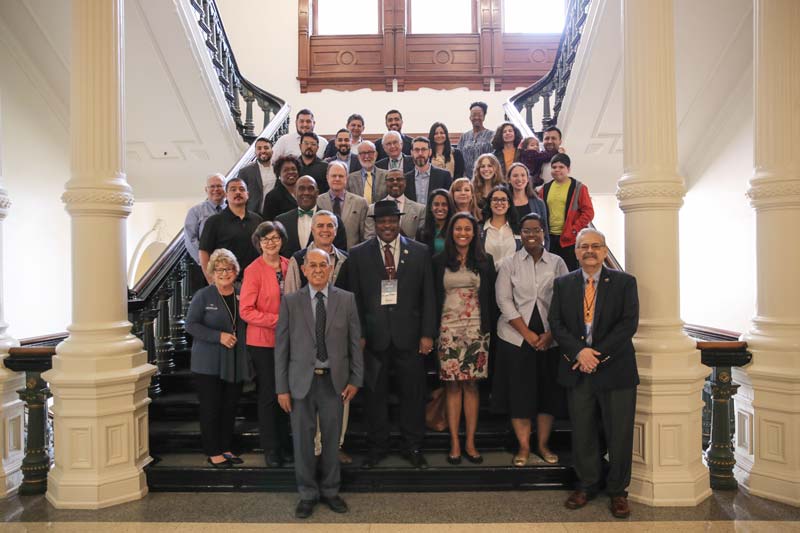 Kathryn Freeman, director of public policy for the Christian Life Commission, prepared attendees for advocacy at the Capitol with a helpful refresher on advocacy from a Christian perspective.

Rooted in the idea of Biblical justice, advocacy is the act of pleading for, supporting, or recommending on behalf of the cause of another.

Freeman reminded attendees that, when they advocate, they should bear in mind that the person sitting across from them is created in the image of God and has worth and dignity. Your advocacy, she added, might open up an opportunity for you to share the Gospel.Instead of self-interest, politics, or winning, Freeman shared that a Christian approach to advocacy is “other-focused” and includes prayer, humility, wisdom and discernment, civility and integrity, as well as patience and the setting of realistic goals.

Making connections with elected officials, and crafting one’s message, are keys to effective advocacy, according to Freeman.

Meetings with elected officials are typically 30 minutes or less, she said. Advocates should be accurate, brief, and courteous, and remember that they are building a long-term relationship. “The first visit is just that, a first step in a longer relationship,” she added.

On Wednesday, attendees and Texas Baptists staff and officers traveled to the state capitol building for a brief gathering and then went on to meet with elected officials and advocate on a variety of issues including those they learned about on the previous day.

During a breakfast session, CLC lobbyists Marshall Kenderdine and Rob Kohler met with attendees to discuss specific legislative priorities for the group. Following meetings with elected officials, attendees were recognized during sessions from both the Senate and House floors.

For more information on advocacy from a Biblical perspective, as well a listing of the Christian Life Commission’s public policy priorities during the 84th legislative session, visit texasbaptists.org/clc.