May meeting of Executive Board includes finale of uplifting outcomes 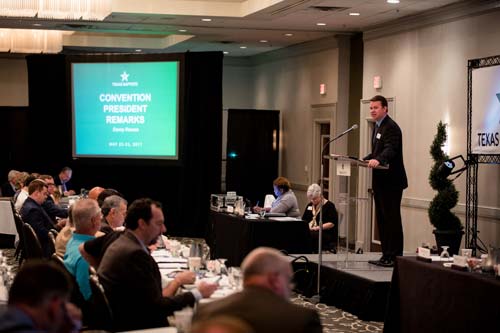 DALLAS - The May Executive Board meeting closed Tuesday with success stories shared by a number of Texas Baptists staff. The flurry of two-minute reports covered recent events, new ministry initiatives and professions of faith, making clear to board members that God is moving in and through the Convention and its churches.

Executive Board Chair David Russell noted at the conclusion of the May board meeting, held in Dallas, “It is a blessing to see our staff coordinating lay-people and churches in these efforts. There are a lot of feet doing this work, not just our dollars. We are doing a great work through the state and nation.”

On Monday evening, Tom Howe, pastor of Birdville Baptist Church, and Kris Dress, pastor of Haltom Road Baptist Church, presented a check in the amount of $29,245.33 to the Texas Baptist Hunger Offering. The two churches joined together in fundraising over two months to provide the gift to Hunger Offering partner Lott Carey Mission to build a water tower in Brewerville, Liberia. 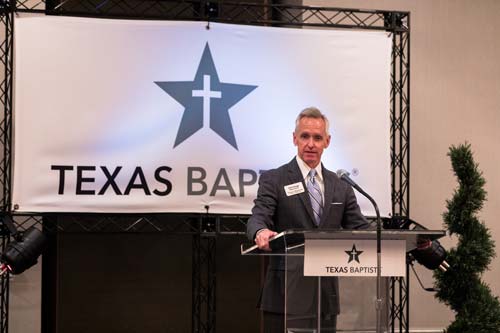 Executive Director David Hardage highlighted several Texas Baptists ministries including the new Missionary Adoption Program, a partnership with the Brazilian Baptist Convention. On a recent trip to Brazil, Hardage was able to meet with several missionaries who are supported through the program and reported to the board that he witnessed MAP working first-hand. Currently, 16 churches have adopted missionaries to indigenous people groups along the Amazon with 32 missionaries available for adoption.

“If we are going to reach the world with the Gospel, other partnership possibilities will be emerging,” Hardage said. “We are open and excited about those possibilities.”

Hardage also highlighted Church Safety Workshops recently held around the state, with more trainings led by MinistrySafe to be held in the fall. He also spoke to the caliber of speakers, workshops and worship attendees can expect at the much anticipated Annual Meeting to be held November 12-14 in Waco.

During Tuesday’s business session, Jill Larsen, treasurer and CFO, shared the treasurer’s report, noting Texas Baptists are at 99.3 percent of Cooperative Program budget giving for 2017 at $8.2 million. Investments stand at $130.9 million, reflecting a $6 million increase primarily due to increases in market value and a new endowment gift.

Gerald Caldwell, chair of the Finance Committee, brought a recommendation for the appropriation of up to $100,000 of additional funds to complete the demolition project of the Baptist University of the Americas buildings.

In his address to the executive board, President Danny Reeves shared that believers need to show compassion when chaos ensues around the world.

“We need devoted followers of Christ who are their best when the clouds come out,” Reeves said. “Compassion isn’t logical – it doesn’t come from us, it comes from the Holy Spirit. We need to be an echo of what Christ has already done for us on the cross.” 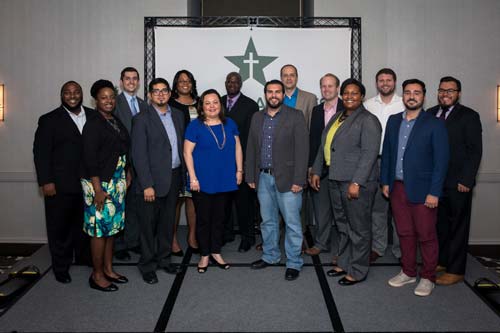 Additionally, the second cohort of Leadership Texas Baptists was honored during Monday evening’s session. Fourteen emerging young leaders participated in the nine-month program where they were introduced to leaders of Texas Baptists institutions, convention staff and ministry leaders around the state.

Staff members Robbie Francovich, cross cultural specialist at the University of Texas at Austin Baptist Student Ministry, and Bobby Smith, director of Chaplaincy Relations, were each recognized for 20 years of service to Texas Baptists.