Extending a hand to those in need in Spain

by Kalie Lowrie on August 24, 2016 in Great Commandment

Ali Hearon, Hunger and Care Ministries specialist, and I recently returned from a trip to Spain to visit our Texas Baptists Hunger Offering partners in Barcelona and Denia. To read more stories about the Hunger Offering at work, check out - Let Love Be Genuine: A Texas Baptist Hunger Offering Story and Reaching out to neighbors and fighting to end poverty.

As Oretta stirred the huge pot of soup, almost as big as she was, she shared with us about her childhood in Italy where she learned to cook for large groups of people. She has lived in Denia, Spain, for many years and finds great joy in making meals at the daily feeding ministry called Extiende tu Mano at Iglesia Evangelica Bautista La Trinidad.

Approximately 40 volunteers serve each week, Monday through Friday, making meals to feed 30-40 people a day and serving the food to homeless in their community. The volunteers are very diverse, from Argentina, Ecuador, Colombia, Chile and other regions around Europe.

Pastor Antonio Calero Cerrado shared that the ministries grew in relation to the need which arose in their community. When the economic crisis for 2008 hit Spain, many people began to struggle in a way they never had before experienced. Middle income families soon became lower income and some in lower income families became homeless after losing their jobs. A country that had been stable for many years and whose residents did not often find themselves in need was suddenly floundering.

Iglesia Evangelica Bautista La Trinidad began to see the impact of the crisis on their city of 40,000 residents and realized the growing needs should be addressed. The church members found a great opportunity to reach out to those in their neighborhood experiencing hard times by increasing their social ministries. 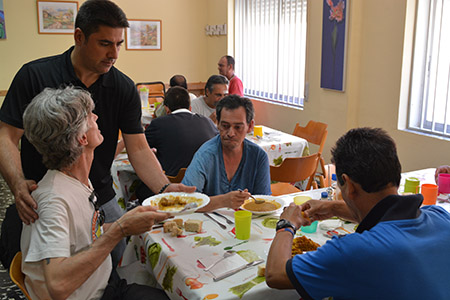 One strength of the ministry is the church’s commitment to community involvement to support the programs. Pastor Antonio shared lists of those who have donated to the programs ranging from the local fire department to a group of high school students. Extiende tu Mano is also a recipient of the Texas Baptist Hunger Offering, one of more than 190 ministry partners fighting to overcome poverty and hunger experienced by millions around the world.

“We position ourselves to fight against the needs, not just to help but to be their voice and partners,” Pastor Antonio said.

In 2013, Iglesia Evangelica Bautista began serving breakfast and midday snacks to school-aged children. The program required funding and volunteers, needs that church members gladly filled. As they began assessing the success of the program, Pastor Antonio realized that some weeks they were only serving around 10 students. He went back to his volunteers and asked if they wanted to continue the ministry since it was only impacting a handful of children.

With tears in his eyes, he told us his volunteers quickly responded their commitment to the ministry - even if it was only for one child.

The philosophy of Extiende tu Mano, according to Pastor Antonio is “to see the need, ask ourselves if we can do something and then start a project to attend to that need.”

Pastor Antonio’s son Josue shared a story with us about a drug addict in the community who attended Celebrate Recovery classes hosted by the church. He soon turned his life around and those who knew him in the community noticed a difference. The local police officers had a conversation with another man who was battling a drug addiction and encouraged the man to go to the church where his friend’s life had been transformed. Although the police officer did not have faith himself, he saw the life transformation and identified the work of the church.

The church sees themselves as an extension of Christ to those in their community. They serve with love and respect and the Gospel is spreading.