AUSTIN—The inaugural Celebration Worship and Prayer Service, held in conjunction with the Texas Rally for Life, took place at Hillcrest Church in Austin on the morning of Jan. 25. The Texas Baptist Christian Life Commission (CLC) coordinated the first-of-its-kind service, and Executive Director David Hardage, President Michael Evans, CLC Director Gus Reyes and the Bethlehem Baptist choir, from Mansfield, were involved in the program.

Following the service, Hardage and Evans also addressed the Texas Rally for Life crowd of more than 20,000 from the steps of the Capitol. The rally was coordinated by the Texas Alliance for Life, a non-profit organization that advocates for pro-life issues in the state. 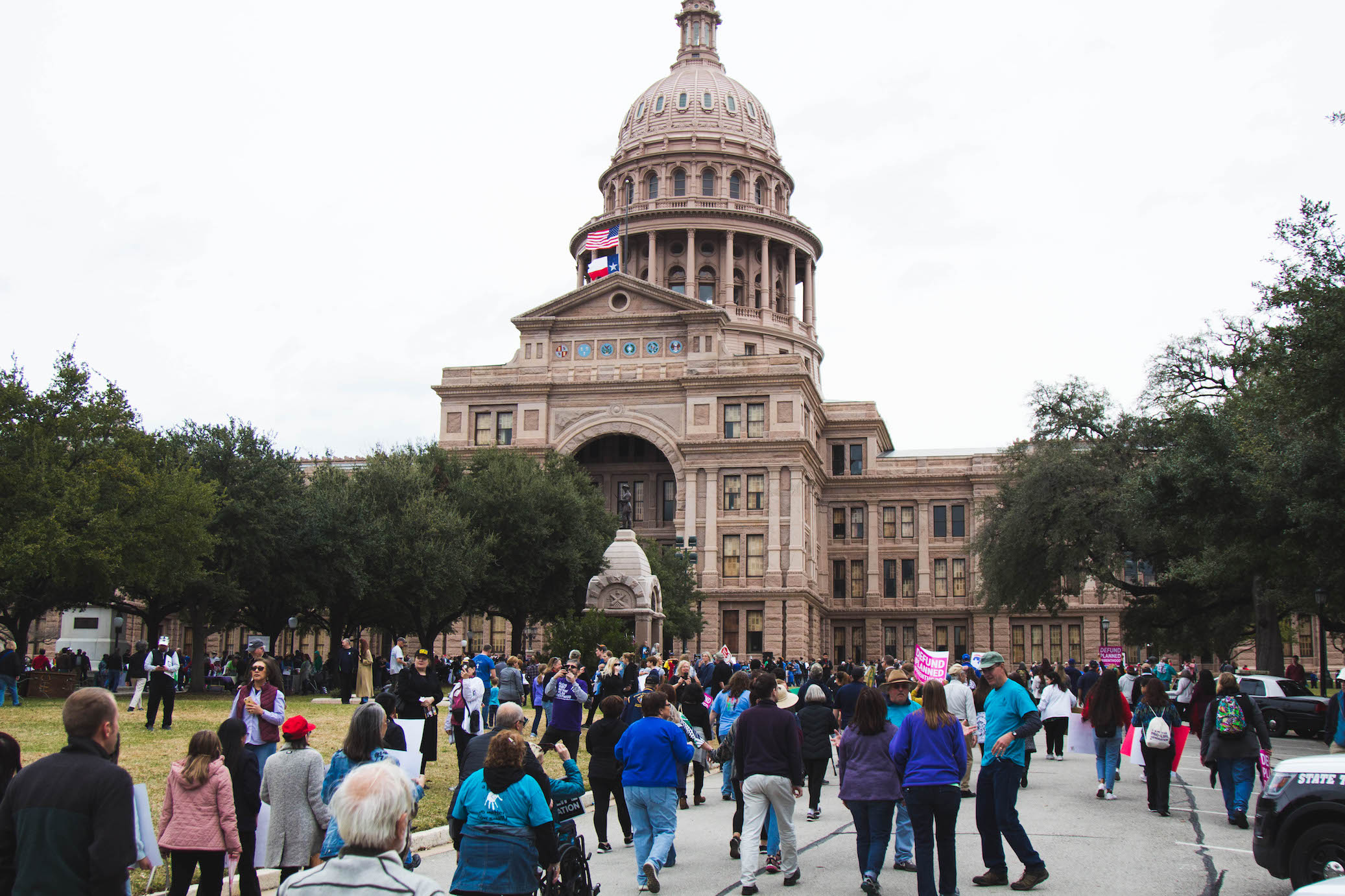 During the morning worship service, Evans preached from Exodus 1 on the sanctity of life. He encouraged the crowd of more than 200 to “speak up for those who are speechless, to advocate on behalf of those who cannot advocate for themselves … and to wave the banner of life.”

Evans noted the commemoration of the 47th anniversary of Roe v. Wade and expressed extreme sadness for more than 60 million unborn children who were the victims of the “earth-shattering decision.”

“Our stance today is for life,” Evans said.

He then shared a personal testimony of his own life, as a child born out of wedlock and what many might see as an inconvenience. He cited that as many as 97 percent of abortions occur out of a social inconvenience.

“If they [my parents] had taken my life, I would not have had the opportunity to contribute to the well-being of this society,” he said.

Evans expressed gratitude to his parents for choosing to give him life, despite the many sacrifices it required including his mother dropping out of college and his father enlisting in the military at a young age.

“Every human being is precious in the sight of our mighty God,” Evans said. In Exodus 1, God remembered each life. Moses owed his life to women who did not follow the law of their government, which used genocide as a means of population control. After the two midwives ignored the decree of Pharaoh to kill male babies, God blessed them for their choices.

“God will bless us today, God will walk with us today,” Evans said. “He will encourage us. He has already gone before us … My prayer is that God would give you courage that on this day you will advocate for the lives of the unborn.”

Celebrating the beauty of life

During the service, Katie Frugé, Texas Baptists Hunger and Care Ministry specialist, also testified to the power of life through the birth of her three daughters. She shared how God walked with her and her husband through her first pregnancy when they were told their daughter would be born with abnormalities. She then pointed to Eve, now eight-years-old, who stood and waved from the front row.

During her second pregnancy, Frugé was again met with news of abnormalities, but she “leaned into an unknown future, trusting a known God.”

The couple named their second daughter Felicity and describe her as someone who brings joy to all who know her. Then, Frugé was diagnosed with deadly stomach cancer at 31 and had her entire stomach removed.

Three years later, she gave birth to a third daughter, Noelle, who is seven-weeks old and was also in attendance.

“We are happy and privileged to stand with you today,” Frugé said. “We have lived and experienced that life is worthy of celebration.”

Another program participant, Jayme Bates, a member of First Baptist Georgetown, shared her personal story of the pain and heartache she suffered after two abortions. Bates spoke to God’s redeeming power in her life as she became a believer. She started a redemptive ministry to those who have been impacted by abortion. 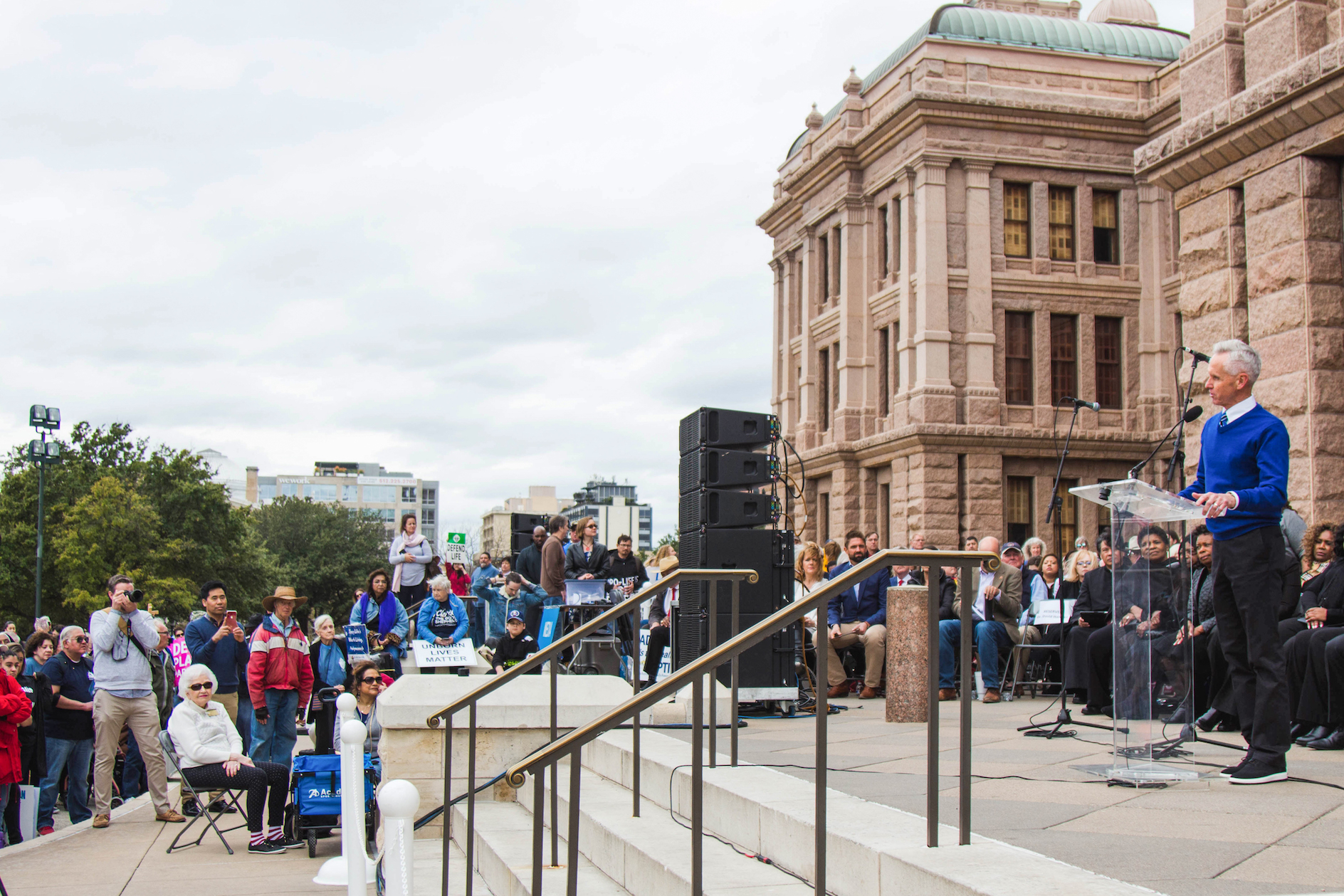 Hardage brought greetings on behalf of Texas Baptist churches and read from Psalm 139:14 as he shared that God is the creator and giver of life.

“We stand not just in opposition to abortion, but we stand for something, and what we stand for is life,” Hardage said. “We believe in and we support with all of our hearts, life.”

Evans led a closing prayer. “We gathered here today in order to rally for life,” Evans prayed. “We have come from all over the state of Texas to stand for the unborn. We know that life is right and God, we thank you for that.”

The CLC speaks to but not for Texas Baptists on a variety of ethical and policy issues as identified by its 18 commissioners. Click here to learn more about ethical issues including life, health and death.