In 2013, when the Grayson Chin Baptist Church began as a church plant in Sherman, they had 25 members, representing about five Chin families. Approximately 100 Chin people were living in the city at that time and through a partnership coordinated by Texas Baptists Intercultural Ministries and Texas Baptists Church Starting, the Sherman church was sponsored by Chin Baptist Church in Lewisville.

Now, just three years later, the church averages 200 people on a Sunday morning, providing a wonderful place for believers to join together in worship, most of whom are refugees from their native home of Burma. The church now represents approximately 40 percent of the Chin population in Sherman.

Seeking refuge in America, the Chin people have endured great hardships in their native country with many fleeing their homes in Burma for the past 10 years. Members of the Grayson Chin Baptist Church have developed relationships with families in the area around the Refugee Resettlement Program in Lewisville and have helped many find a new home in Sherman. Church members have helped refugees find jobs and served as a community liaison, connecting with them and helping find an apartment and information on the community from local grocery stores to the church. 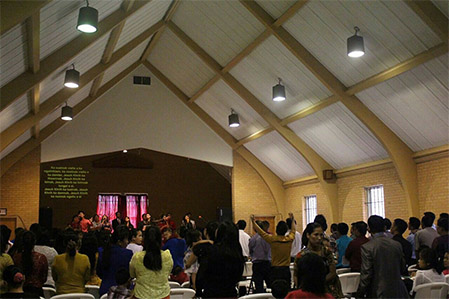 “When they come to the US, they need somebody,” said Pastor Edna Sung Hnem. “They do not have a car or many belongings and do not know how to coordinate all the logistics. We reach out to them and offer to help with all their needs.”

The church has essentially become a resettlement agency. Many refugees have found employment at the local Tyson Food, Inc. plant. Being surrounded by fellow believers has provided a great comfort.

The road to becoming pastor of Grayson Chin Baptist Church was not always easy for Hnem, but her hardships have allowed her to deeply connect with her church members and share in their sufferings and joys.

When she graduated from college in Burma in 1997, Hnem began volunteering at a Baptist church in the nearby city and then returned to her home village and worked in the church there the following year. The following year, after she began her ministry as pastor in her local village, Hnem faced many personal difficulties including the loss of her father, sister and a total of 13 friends and family who passed away within three months. Pastor Hnem continued to pursue the call of God on her life and faithfully served in her local church.

In 2005, political unrest was growing in Burma. One day, the military entered her village and started to torture people. They entered her church and captured her, asking her to perform acts she was unwilling to do. Hnem was taken to a nearby military office and her life was threatened at gunpoint. Standing firm in her faith, Hnem would not compromise her beliefs and by the grace of God she was released from their containment and sent back to her village.

Feeling unsafe in her home, Pastor Hnem and her husband fled the country and sought refuge in Malaysia. The couple lived there for three years in a refugee camp and Pastor Hnem volunteered as pastor for six local congregations.

In 2012, the couple arrived in Texas and were welcomed by Chin friends including Pastor Chum Awi, pastor of the Chin Baptist Church in Lewisville. It was comforting to arrive in a country where she was surrounded by friends and believers. Soon Pastor Awi asked Hnem if she would be interested in planting a church in Sherman where more than 100 Chin refugees resettled.

Since that time, Pastor Hnem has seen God move in many ways through her congregation in Sherman. The willingness of church members to reach out to new residents and help them settle has been so encouraging. Currently, Grayson Chin Baptist Church is looking for a permanent building to house their church. Since their inception, they have met at a local Methodist church, but the need for a larger space to meet each week has grown alongside the increase in church membership. The church is also seeking to hire a second pastor to help lead the growing congregation.

Grayson Chin Baptist Church has followed God’s leading in reaching out to fellow refugees in need and the impact has been immeasurable.