EL PASO—One day after a mass shooting which took the lives of 20 people and injured 26 more, Baptist churches around El Paso joined together for a prayer service on Sunday, Aug. 4, at First Baptist Church of El Paso. More than 400 people attended the service, which was led by seven local Baptist pastors who spoke of healing in the midst of an unthinkable tragedy in their city.

Mark Rotramel, pastor of First Baptist Church of El Paso, organized the event on Saturday evening, just a few hours after the shooting occurred at a local Wal-mart a few miles away from the downtown church.

“Our intent is to say our churches stand together, and we want the community to know that,” Rotramel said. “This is not about our churches, but the Church.” 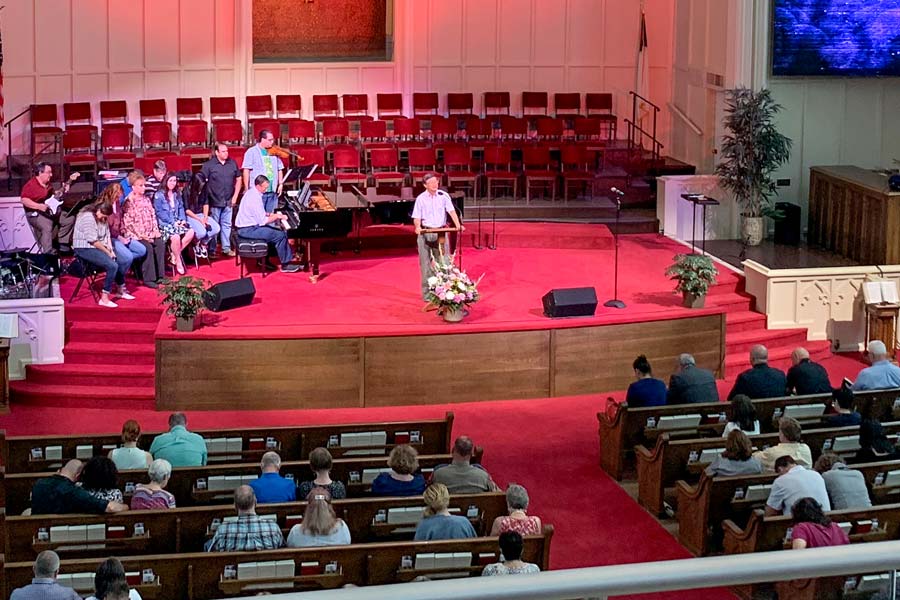 Walter Mueller, lead pastor of Del Sol Church, shared from Psalm 34:18 which says, “The Lord is close to the brokenhearted and saves those who are crushed in spirit.”

While praying for the victims’ families and Walmart employees, Mueller said, “Lord, we pray for these families. We pray that they will not grieve and weep as people without hope, but that they will know that Jesus is our hope …  Lord, use us as messengers of hope, messengers of the Good News.”

El Paso Mayor Dee Margo, a member of FBC El Paso, addressed attendees, sharing about the events which unfolded over the previous 24 hours. 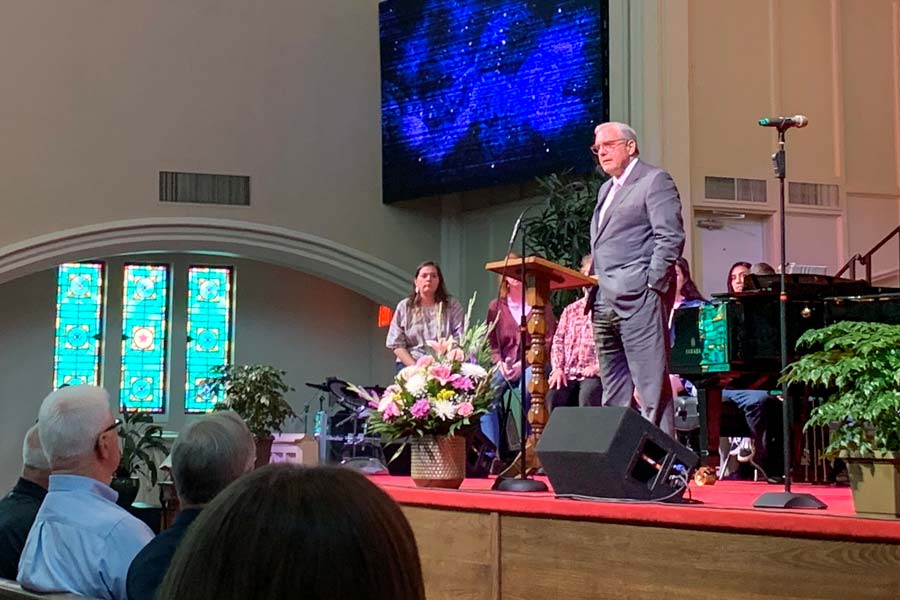 “This tragedy will not define El Paso,” he said. “We are a special community and we will overcome.”

Margo said he saw great courage throughout the city. He commended the first responders for their quick action following the shooting. Margo visited survivors in the hospital on Sunday afternoon, including a 10-week old baby who lost his mother and father in the shooting.

“I hope and pray this will bring us together as a community like never before,” he said.

Praying for medical professionals and those on the scene in hands-on ministry to victims and families, Ariel Martinez, pastor of Del Sol East Montana Campus, said, “we are thankful for the men and women God uses to heal these bodies that are broken.”

Whilst leading a prayer for the country, Patrick Six, pastor of Scotsdale Baptist Church, said, “God, your word tells us to be strong in the Lord and in his might. I pray we would be strong in the Lord, that our light would shine in the darkness, that we would minister to those who are hurting, in the name of Christ … We trust you to heal this land.”

Mike Woods, pastor of Coronado Baptist Church, shared, “I believe the Lord will use us as the Church to bring revival here in this city.” He led a prayer of repentance for the church, seeking the will of God and asking God to show believers how they can be part of the healing of their city.

At the conclusion of the service, the congregation joined together and sang “Lord, I Need You” as a declaration of the need for God in the midst of grief and sorrow.

“It’s impossible for us to give and meet the needs of this community in the coming weeks and months if we are not full of Christ,” said Elvin Porflit, FBC El Paso worship pastor. “Let’s join together and sing of our need for him.”

Continued prayers needed in days ahead

Following the service, Rotramel expressed gratitude to Texas Baptists for reaching out through emails and calls over the first 24 hours. The support he received from fellow pastors and churches provided comfort in a very difficult time.

“Continue to pray for all of our churches,” Rotramel said. “This is a great opportunity for us to point our city to Jesus and for him to give the comfort only He can give.”

“We are concerned about the people involved—their spiritual and physical condition … our concern is how do we not lose these people and double down on ministry to them.”

Rotramel reminded attendees that continued prayer was needed for first responders and medical personnel who will be dealing with trauma in the weeks and months to come. He asked Texas Baptists to continue praying for their city, even after the news cycle had moved on.

Pastor Six also noted additional prayers for Christians in the city were needed. “The biggest thing is for us to be light in the darkness,” he said. “Christ is our light. El Paso, like every city, needs the hope of Christ. Pray that we would be strong and courageous with that message and with God’s love.”