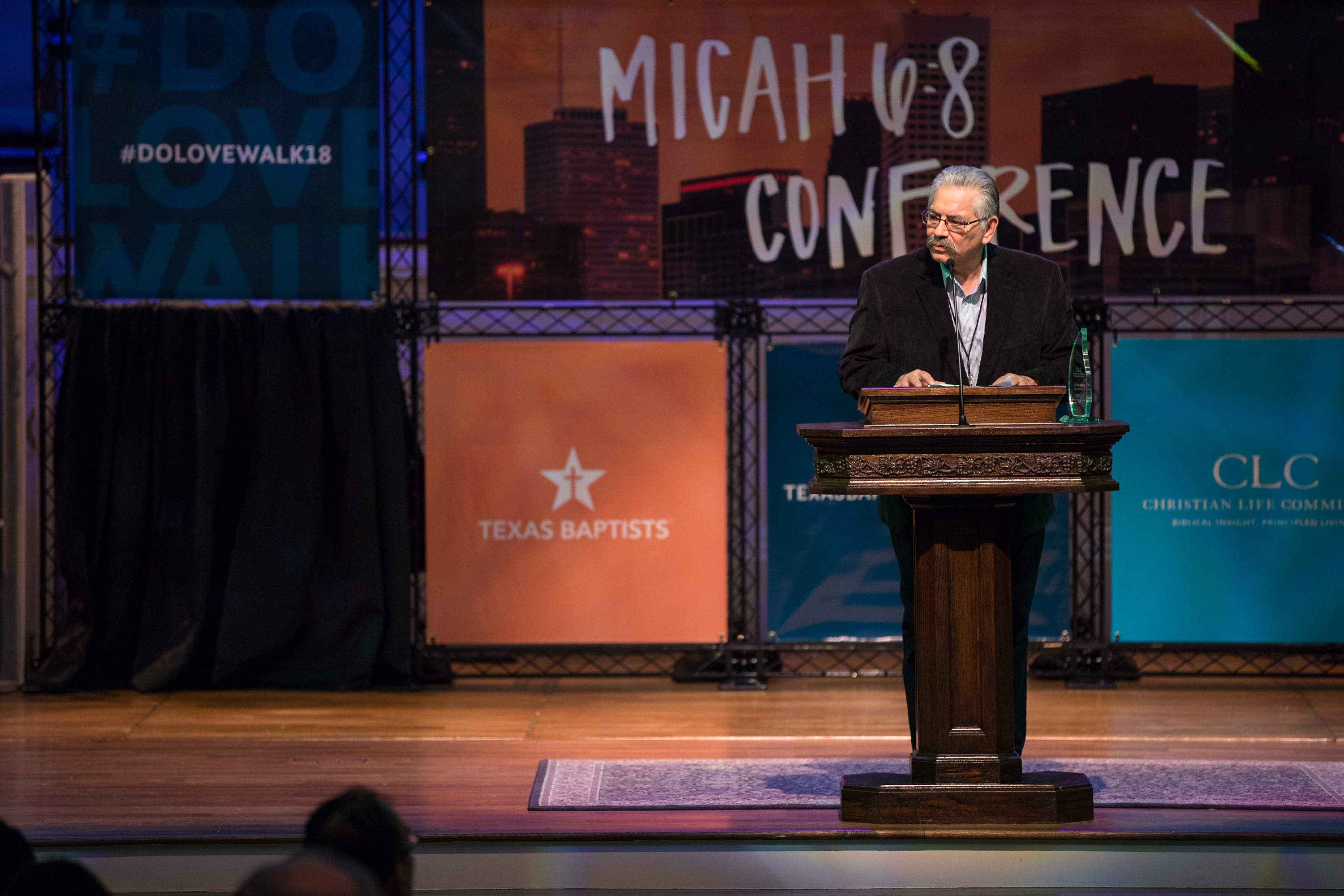 SUGAR LAND–A diverse crowd of more than 300 united in worship and heeded the call to live in right relationships with God, self, others and creation at the Texas Baptist Christian Life Commission’s Micah 6:8 Conference March 23-24 in Sugar Land, Texas.

“We hope our work is guided by the words of the prophet Micah, to do justice, love kindness and walk humbly with God,” said Jacob West, chair of the Christian Life Commission and pastor of First Baptist Church of Plainview.

Micah 6:8 Awards presented to Billings and the Jacksons 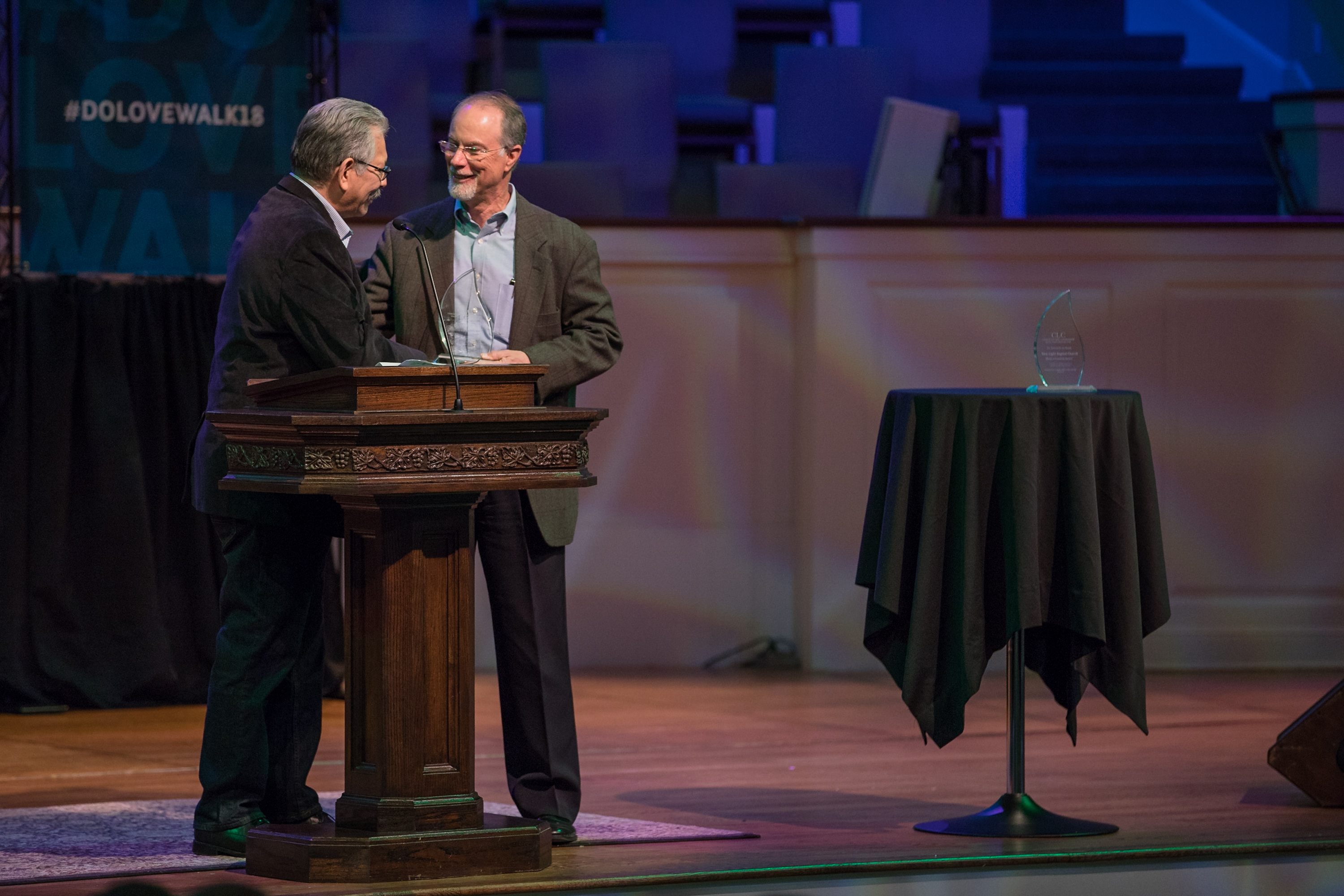 During the opening session on Friday, two Micah 6:8 Awards were presented to Tom Billings and Dr. and Mrs. Kenneth and Ambra Jackson. Billings served at the Union Baptist Association for 23 years, including 18 years as Director of Missions. CLC Director Gus Reyes noted Billings’ commitment to the transformation of Houston, including igniting passion for ministry, missions and church planting. 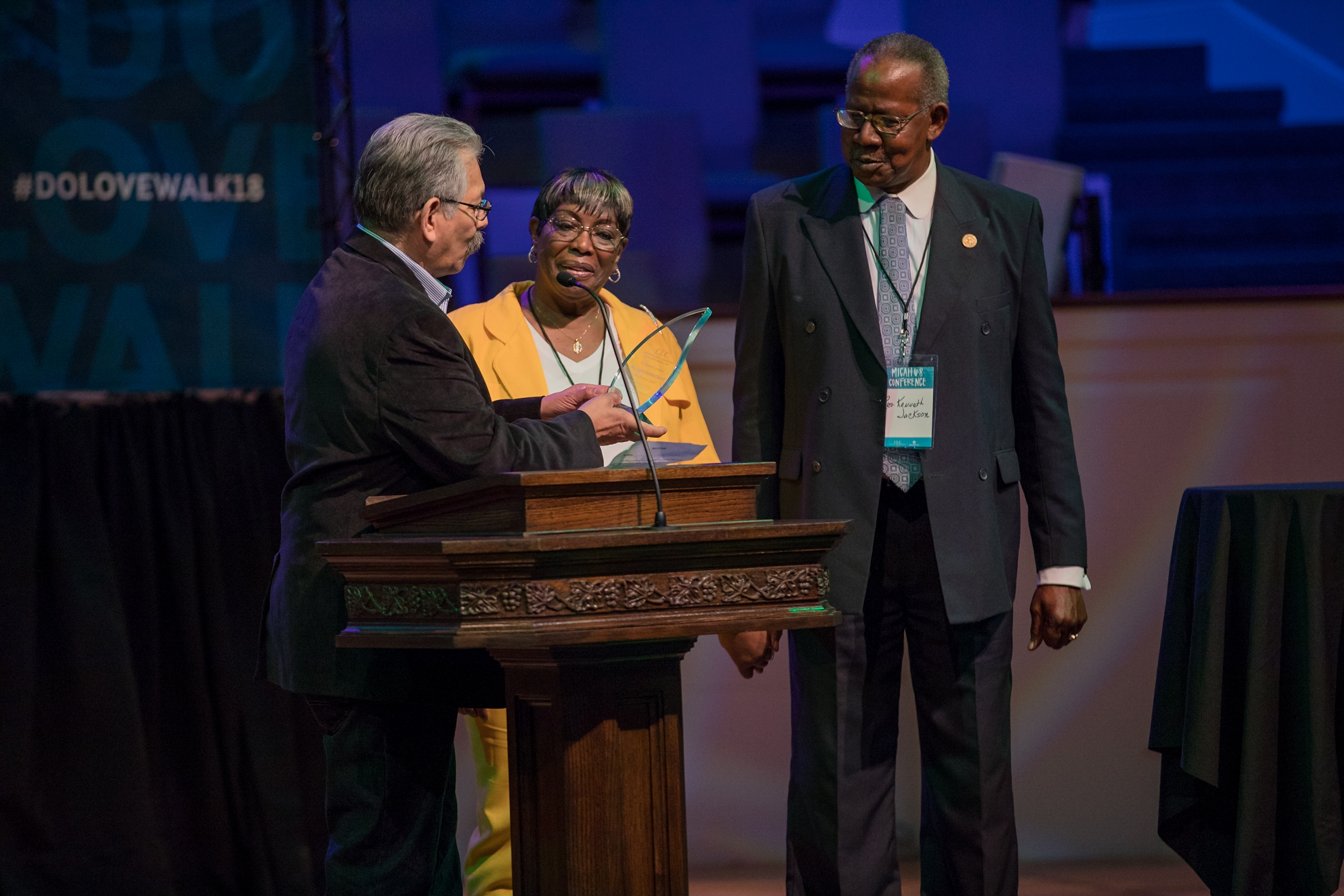 The Jacksons serve as pastor and first lady of New Life Baptist Church in Lubbock. “This award is in recognition of how [the Jacksons] tirelessly reached out to the people in need in their community,” said Reyes, noting their “Love ‘n Lunch” program which provides meals and resources to those in need within their community.

Corbett emphasizes the role of justice in poverty-alleviation

“We are created to know Him and be known by Him,” said Steve Corbett, associate professor of Community Development at Covenant College, during his Friday morning address. “We are created to be worshippers. We are image bearers. That makes you incredibly precious.”

Corbett outlined the call for humans to be stewards of creation even though the fall deeply affected relationships between God and self, others and creation. Asking the audience to answer the question “who is poor?,” Corbett discussed his own realization of personal brokenness and the brokenness of those around him. Rather than viewing poverty as a socio-economic barrier, he encouraged attendees to enter their communities with an open mind to what may be missing, rather than trying to provide quick fixes to problems.

“Even though we are all poor, don’t minimize the reality of physical poverty and material poverty,” Corbett cautioned.

Drawing from Colossians 1:19-20, Corbett said, “Jesus died more than just to reunite people with Him, as fundamental and central that is. He had to pay for sin which wrecked the world.

Poverty alleviation is about reconciling relationships – a process in which people, both materially poor and non-poor, move closer to living in right relationships with God, self, others, and the rest of creation.”

“The diversity in here is evidence that something is happening,” said Mason.

Reading from Leviticus 19, Mason discussed the abandonment of evangelicalism in America resulting in a divorce between “theology and me-ology.” Like a tailored suit cut-away and shaped in the image of its wearer, Mason said, “We have been cut away to show off the glory of Jesus Christ in the world.”

The Church should also be a display of God’s holiness to one another and to the world. Believers need to recognize that love is a component of the covenant with God, as the Israelites were reminded in Leviticus. Mason cited a backlash in America and a need for the Church to wake up and be salt and light in their communities.

Detailing her experience as a child of immigrants in the United States, Jenny Yang, senior vice president for advocacy and policy for World Relief, discussed the impact immigration has on the church. Yang shared her view of immigration, not as a political or economic issue, but a spiritual issue.

“People think immigrants are a burden on our country rather than people to be valued,” said Yang, citing numerous biblical stories of immigrants from Moses to Jesus.

She encouraged the use of Micah 6:8 and Proverbs 31:8 as guiding scripture in how believers should engage with the immigrants in their communities. While there has been a disheartening narrative surrounding immigrants in the nation, Yang shared, “We must speak with grace, with truth, and ultimately with love to affirm immigrants as made in the image of God.”

Yang emphasized to attendees the importance of utilizing advocacy and public policy channels to impact immigration reform as well as loving the neighbors God has placed in a their path. Ultimately, she shared the importance of walking humbly with God. 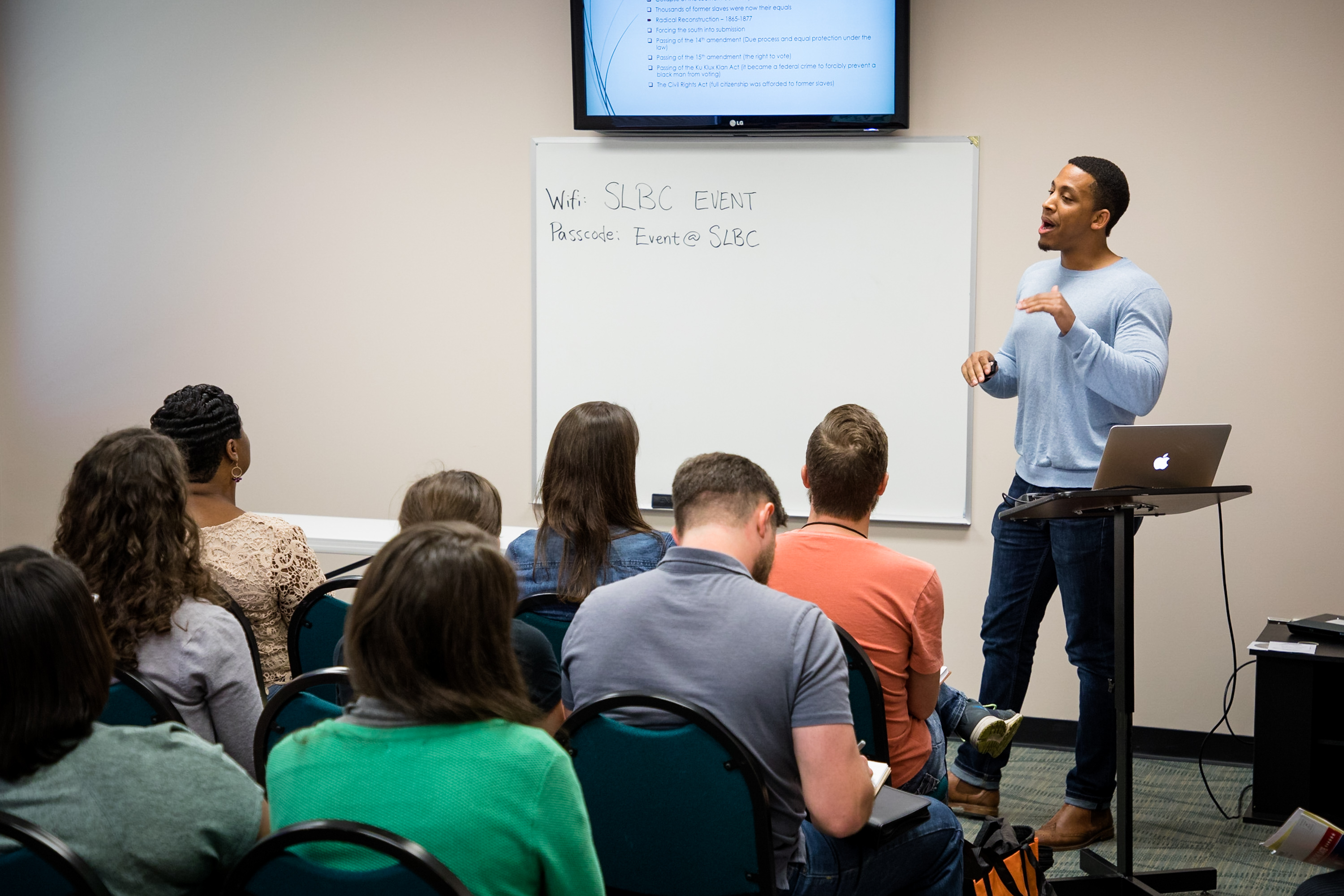 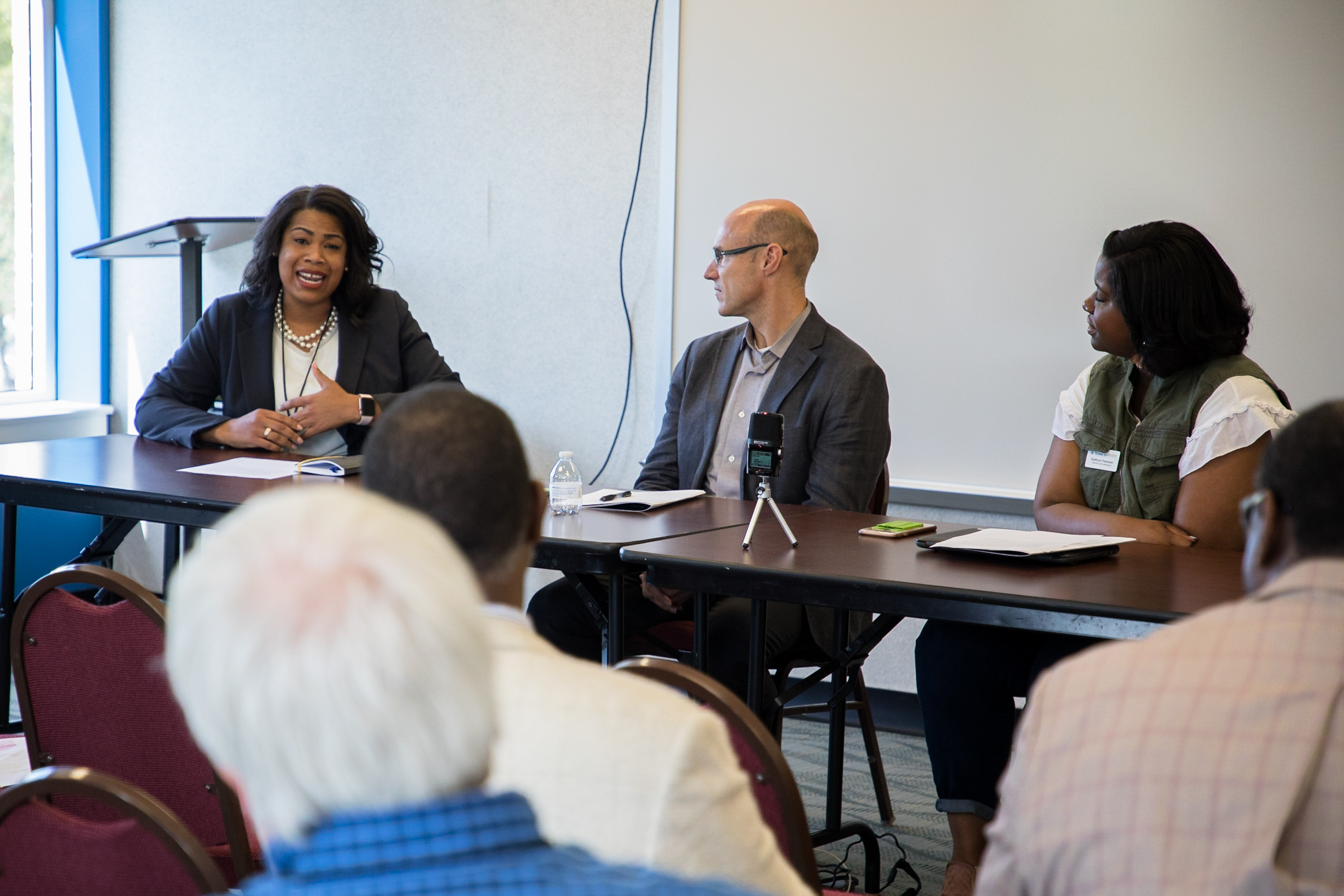 Workshops were offered to participants on topics ranging from community ministry and immigration to creation care and homelessness. Dynamic worship was led by the City of Refuge Church in Houston throughout the two-day event, which involved songs in multiple languages including Spanish, French, Indonesian and Chinese. A special song was also performed by the youth choir of the Canaan Bhutanese Church of Houston. Title sponsors for the conference were the Diana Garland School of Social Work at Baylor University and George W. Truett Theological Seminary at Baylor University.

“I am so thankful for the Micah 6:8 conference, as we were challenged to not only live in obedience to the Gospel but also to act and do something for those who are vulnerable,” said Anyra Cano, youth minister at Iglesia Bautista Victoria en Cristo in Fort Worth.